The London men’s show schedule has been packed to breaking point — and so have the after-hours parties. 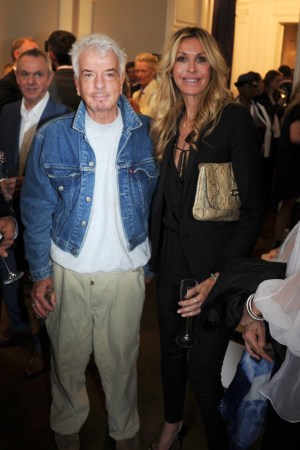 LATE NIGHT LONDON: The London men’s show schedule has been packed to breaking point — and so have the after-hours parties. Monday night was particularly busy, with parties all around town.

Timothy Everest, meanwhile, hosted a party at the Institute for Contemporary Art, to launch his latest project, a collaboration with the luxury brand created by the Japanese tattoo artist Horiyoshi III.

Models wore looks from the collaboration — a range of tailored garments emblazoned with prints based on Horiyoshi III’s original drawings — and stood like statues on plinths around a gallery. The centerpiece of the display was a naked man being tattooed live by Horiyoshi III’s apprentice Alex Horikitsune Reinke.

Tracey Emin bustled around the room in her cowboy boots, introducing Everest to one and all: “You must meet my friend Tim — he’s the designer.” Mother of Pearl designer Maia Norman, fresh from a recent car rally, brought along her stylish teenaged sons: “I won’t be able to ban them from tattoos after this!” she said, although her eldest had already gotten one, although he did ask for parental permission beforehand.

Everest explained his fascination with tattoos: “Although I don’t have any myself, I love Japanese ones in particular. In my work I always come back to the idea of bespoke — and decorating the body itself is the ultimate bespoke. The thing that tailoring and tattoos have in common is they’re both about hidden things, under the surface. When you look at a good suit, it’s nice — but you can’t see all the complicated structure underneath.”