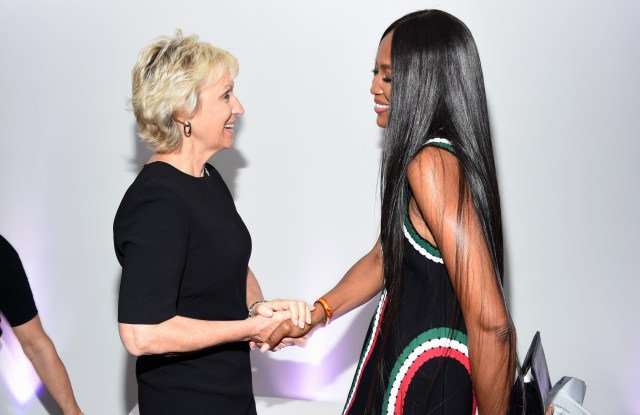 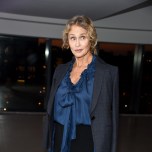 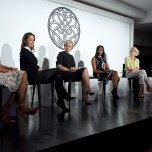 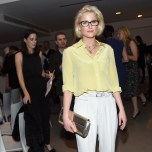 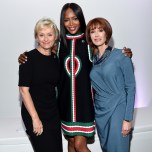 On Tuesday night, Spring Studios played host to a panel of some of the most influential women in fashion and media, gathered to raise awareness for the Women’s Brain Health Initiative. Candace Bushnell, Dr. Samantha Boardman, Naomi Campbell, Mamie Gummer and Lauren Hutton joined Tina Brown for a discussion on women’s brain health and all-around well-being.

Hutton had just flown in from Mexico, where she traveled for a job after walking in the Bottega Veneta show in Milan. “I didn’t fall — we had shoes that were very interesting, there were the usual regulation gigantic heels. But then they were sort of Chinese foot-binding,” she said, during the cocktail hour. “I’d never seen a pair of shoes like that in my 54 years of doing this. I was thrilled when I got through it without falling. And also, everybody clapped.”

The show closed with Hutton walking arm-in-arm with Gigi Hadid, which became instant Instagram fodder. “They said to me ‘quick, get back in line,’ and for the first time in my life I said ‘I can’t. I won’t be able to make it,’” Hutton recalled. “And the very smart stylist from England said, ‘You can follow Gigi.’ Gigi was in the middle — I shook hands with her. I said, ‘I can’t follow her, but I’ll hold onto her.’ She was a little joy — or a tall joy. So that’s awfully nice.”

Onstage, the six women sat and discussed their individual approaches to health. “Over 70 percent of new Alzheimer’s patients today are women,” Brown said, introducing the group. “For the first time, sex and gender are being taken into account,” when it comes to brain health research, added Lynn Posluns, president of the Women’s Health Initiative.

Dr. Boardman suggested a Mediterranean, plant-based diet and “natural movement,” as she called it. “It’s not going to the gym and then sitting at your desk all day long,” but rather incorporating movement into daily activities, like choosing the stairs over the elevator.

“Breathing,” Campbell said of her tactic to handle stress management. “I went to a breathing class and it helped me so much in my life.” Campbell added that learning to take time off was another huge benefit to her health and well-being, as was leaving her phone in another room at night, so it’s not the first things she checks in the morning.

Each woman spoke of her own personal or cultural reasons for supporting the initiative, with Gummer giving the most straightforward, blunt response of the evening: “Really, I would not be here without my brain.”