The party drew 30 or so of the author's friends and well-wishers. 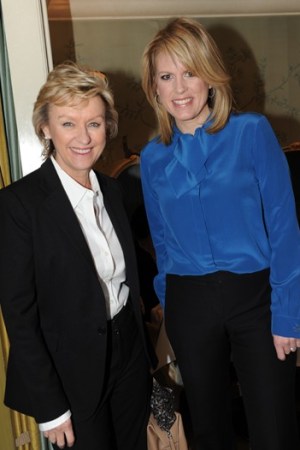 It may have been frigidly cold Thursday, but the intimate luncheon co-hosted by Tod’s and Tina Brown at the Bergdorf Goodman restaurant felt anything but. Held in honor of Kate Betts’ new book, “Everyday Icon: Michelle Obama and the Power of Style,” the party drew 30 or so of the author’s friends and well-wishers. Deeda Blair was among the first to arrive, quickly embracing the guest of honor, who was D.C.-bound that same evening for a fashion and first-lady retrospective at the Smithsonian — though she’ll return on Sunday for a smattering of shows before setting off on her nation-wide book tour.

“I’m very proud to be a ‘first lady expert’!” Betts said, laughing. “I was a history student!”

Blair held court amongst her many admirers in a quieter corner of the room as revelers trickled in, among them Tory Burch, Aerin Lauder, Deborah Roberts, Maggie Betts, Alexandra Lebenthal and Marina Rust. Ruben and Isabel Toledo arrived arm-in-arm just before Jennifer Creel and Thelma Golden. Iman swept in clad in Chris Benz and Michael Kors and kept her sunglasses on. She rolled her eyes at the mention of fashion week madness: “I’m not doing the shows. One or two things, but really, I¹m staying away from Lincoln Center!”

A laughing Brown agreed: “It’s not fashion week in my office!”

“Michelle Obama strikes me as someone with the brains of Hilary Clinton, but with Jackie O’s pearls on top,” the editor mused. “You never really know what she’s going to wear. I like that about her!”