The movie is based on a memoir by Kim Barker about working as a war reporter in Afghanistan. 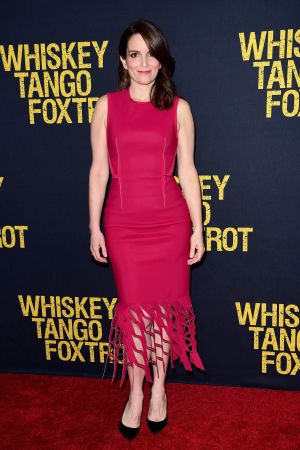 It was a few minutes past 7 p.m. on Super Tuesday, and the first primary results of the day were just rolling out.

“It’s been insane, right?” Tina Fey exclaimed from the red carpet at AMC Loews Lincoln Square when asked about the election season. “I’m going to watch the news as soon as I go home. I keep saying everybody needs to watch the Mike Judge movie ‘Idiocracy’ again to see how close we are getting to it.”

But on Tuesday, the crowd had come out to watch a different movie with a political bent — “Whiskey Tango Foxtrot.” The flick, which Fey stars in and also helped produce, is adapted from a memoir penned by Kim Barker about working as a war reporter in Afghanistan and Pakistan. Barker was described as “a sort of Tina Fey character” in the book’s 2011 New York Times book review, and Fey took the hint.

“Kim’s book was so funny,” Fey commented. “To be writing so intelligently about this complex and dire situation, but to find so much humor in it, I thought was really a great approach.”

The film brought Fey and the rest of the cast — Margot Robbie, Billy Bob Thornton, Martin Freeman and Nicholas Braun — to Kabul. Well, the New Mexico-version of Kabul. “New Mexico was amazing,”  remarked Robbie, who portrays another war journalist in the film. “It was a really stunning landscape, one that adapted really well to looking like Afghanistan — not that I’ve seen it in person.” Neither had Braun, but he noted that the set design was a convincing recreation of the Afghan capital. “I can show my pictures to people, and they’ll probably believe it.”

Bob Saget, who came to the premiere with two of his daughters, brought attention back to the drama of election season. “What we’ve been watching right now is really a cage match, it’s a roast,” he lamented. “It’s a scary time.” But also a time for celebration, and the comedic actor praised several friends who took home Oscars on Sunday. “I was happy for Brie Larson. She was my daughter on a sitcom for a year — she played my TV kid.”

Saget, who recently reprised his role as Danny Tanner on “Fuller House,” later got to hang out with another one of his “TV kids” at the film’s after party at Tavern on the Green — and it was none other than Ashley Olsen.

A movie premiere, multiple primaries, and a “Full House” mini reunion— it was a Super Tuesday, indeed.