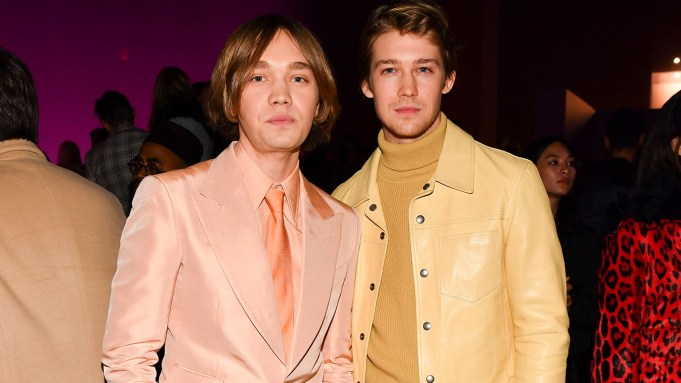 Love had half a mind to shrug off photographers requesting a standing photo, but eventually obliged. When it was time for the show, she tossed on a pair of sunglasses.

“Sorry, we’re only doing photos,” a publicist for Alwyn, who these days can’t get through an interview without being asked about girlfriend Taylor Swift, confirmed.

Elgort stayed close to girlfriend Violetta Komyshan ahead of the show, holding hands prom-style for photographers.

“This is just a fashion night out,” said Elgort, who has known Ford since the 2015 Met Gala. “And then we’re going to go to a restaurant after. But we’re already dressed up, so it makes it more exciting. It’s a fun date night. We’re going to go somewhere casual.”

Schwarzenegger, who has appeared in Tom Ford campaigns, was at the designer’s show last February, when he was about to take off to promote his Bella Thorne rom-com “Midnight Sun.” This year, he’s heading down to Austin, Tex., in March, where his new film “Daniel Is Real” premieres at SXSW.

“I actually filmed it here in New York,” he said. “It’s a psychological thriller based on the bestseller.”