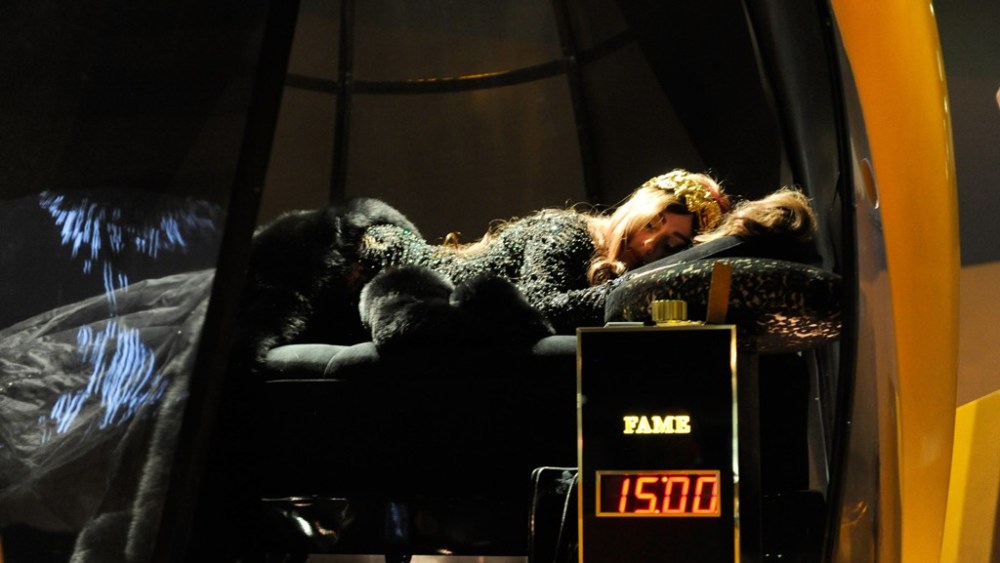 This was the last big party of fashion week, and guests mingled about the lobby of the Solomon R. Guggenheim Museum in black-tie masquerade, sipping black cocktails that smoked with dry ice. Marc Jacobs stood near the bar in a pair of bedazzled horns, an old runway prop, he said.

Inez van Lamsweerde sported a top hat. Someone was walking around in a fencing mask with a taxidermy house cat attached at its back. Muscled shirtless men in harnesses, meant to look like the Lilliputian climbers who hang off a nude Lady Gaga in the ads for her new fragrance, Lady Gaga Fame, handed out sample-spritzed cards.

Gaga slumbered through it all on Thursday night, center stage inside a giant mock-up of the bottle designed to contain the inky-black eau de parfum that everyone was there to celebrate. The pop star had promised a performance at the launch party, and this seemed to be it. Her nap was projected on a giant screen above the crowd and live-streamed to her fans online. Partygoers were permitted to lay hands on the singer, who wore a long black gown and 24-karat-gold-plated crown, through a little porthole. A digital clock in the chamber stayed frozen at “15:00.” The performance was called “Sleeping With Gaga,” the singer had tweeted earlier in the day, and she seemed to be saying something about the nature of fame in the era of life-casting.

After about an hour, Gaga awakened. The DJ played David Bowie’s “Fame.” She looked in the vanity mirror, powdered her nose with a big black brush, produced a bottle of Veuve Clicquot and posted iPad self-portraits on Instagram before venturing to the museum’s second floor. A number of VIP guests had taken in the performance from a cordoned-off elevation of the museum’s ramp, including Yoko Ono, who looked on over the frames of her dark glasses.

Her victory lap complete, Gaga promptly returned to the bottle. The celebrated tattoo artist Mark Mahoney, who had flown from Los Angeles specifically for the event, began inking a cherubic little figure at the base of her recently shaved scalp. By then, the crowd had begun to trickle out. Those who left early missed her unpeeling her top and flashing her breasts to the crowd from inside her chamber. It didn’t garner much reaction.

As the party wound down, Lindsay Lohan, who knows something about the nature of contemporary celebrity, stood outside the museum’s front door, smoking in a little alcove.

“People want to be able to relate to people,” she said between drags on her Parliament when asked about the live-streamed performance. “It’s nice when you can. I mean, clearly with 29 million followers, she has no problem with that. But I think that’s what’s great about her — that she’s a real person at the end of the day.”

WWD thanked her for her time and told her to enjoy her evening.