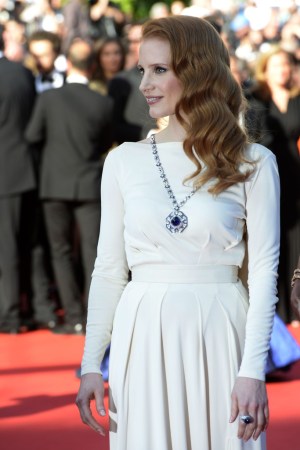 Richard Burton once said of Elizabeth Taylor: “The only word Elizabeth knows in Italian is Bulgari.”

Jessica Chastain wore two pieces by the Roman jeweler that once belonged to Taylor as she hosted the world premiere in Cannes for the restored version of “Cleopatra” — the Twentieth Century Fox film that marked the start of the couple’s turbulent romance 50 years ago.

Bulgari items from the Elizabeth Taylor Estate bought back by the jeweler at a Christie’s auction in 2011 were on display, including an Egyptian-style turquoise and gold hand mirror Bulgari presented to the actress when she was filming “Cleopatra.” Photos of Burton and Taylor lined the walls and mannequins were dressed in original costumes from the film.

“To me, Taylor was pretty classic,” shrugged rainbow-locked model Chloe Nørgaard. “But I definitely think anything to do with Egypt is awesome, super inspiring. I love the culture, old civilization.”

Laura Dern, who is in town for a screening of “Nebraska,” starring her father, Bruce Dern, said, “I had the privilege of knowing Taylor and the restoration is incredible, I’m very excited that they’re preserving film in this way. I’m jetlagged so I thought I’d have a hard time sitting through a film that is four hours long, but it wasn’t, it was beautiful.”

“I’m hoping people will watch ‘Cleopatra’ and perhaps be inspired to make another massive epic drama with passion, color, excitement, love,” Chastain added. “It’s been a long time since we’ve had a big budget grand-scoping film like that.”