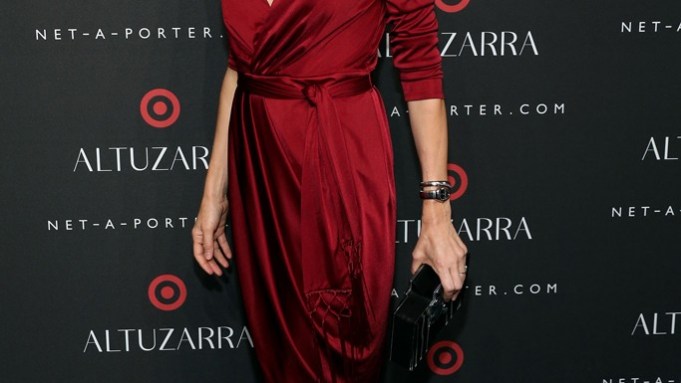 Under a canopy of tiny white lights that glittered like stars, Naomi Watts, Keri Russell and Naomie Harris were among those shopping the Joseph Altuzarra for Target collection Thursday night at a party to mark the line’s upcoming launch.

“I actually just met [Joseph] but I’ve worn his clothes before. His clothes are strong and sexy with an edge,” said Watts, whose most recent film, “Birdman,” won raves when it premiered at the Venice Film Festival. “I can’t believe you can buy them at Target.”

At Skylight Clarkson Sq., the main room was broken up into smaller areas by long mirrors, giving it a fun house atmosphere, giving mannequins wearing the designs every opportunity to check themselves out.

“I’ve always been a fan,” Russell said. “I tend to like very simple things. Joseph does a cool version of chic.”

For the collection, Altuzarra had the theme of a global traveler in mind, a woman who visits Morocco, Japan and China, looking chic all the while. “It’s very true to our brand,” he said. “It’s anchored in a very Franco-American style. It was this idea of a spirit of sexiness and sophistication and polish. That feels very Altuzarra to me.”

Jeff Jones, executive vice president and chief marketing officer of Target, said Altuzarra for Target is “a sexier side of collaborations with Altuzarra’s use of python prints and red velvet. The ad campaign delivers the message with Eva Herzigova photographed in hotel rooms by Peter Lindbergh. “We’ve been doing collaborations for so long, so the bar is ourselves,” he said. “We’re expanding the definition [of collaborations]. We’re going to grow beyond fashion.”

“There’s a great buzz factor and frenetic level of energy,” said Brian Cornell, Target’s recently appointed ceo. “I’ve been watching how guests are reacting. I’m really proud of the team and very excited about the collaboration. We really hit the mark.”