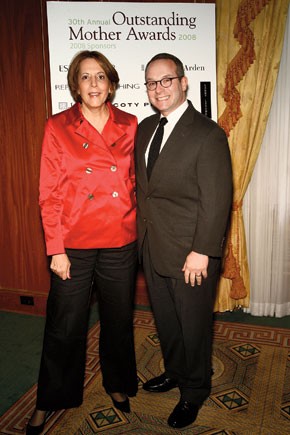 NEW YORK — “As a working mother, I always see the glass as half empty,” said Vera Wang, one of the recipients of the 30th Annual Outstanding Mother Awards. “It’s that challenging balance I try to keep every day.”

Wang, the mother of two teenage girls, offered advice about balancing work and motherhood. “You have to give up perfection and let some of it go, and you have to pick your battles,” she told WWD.

The designer was honored at the Pierre Hotel Thursday, along with Elizabeth Edwards, author, attorney and children’s advocate; Debbie Murtha, senior vice president, cosmetics at Macy’s Merchandising Group, and Caroline Kennedy, vice chair, New York City Fund for Public Schools. Edwards’ husband, former Democratic presidential candidate John Edwards, attended the luncheon and caused a stir as he posed for photographs, including one with Kennedy, who is supporting Sen. Barack Obama.

Kennedy said she was convinced to accept the award by her cousin, Mark Shriver, vice president and managing director of U.S. Programs for Save the Children, the beneficiary of the event.

In presenting Kennedy with her award, Shriver said, “We come from a competitive family.” He recalled that when he learned Kennedy would be honored he called his sister, Maria Shriver, and said, “Caroline is mother of the year and, ha, ha, you’re not.” In a bit of one-upsmanship, Maria Shriver responded she had been asked first to present the award.

Mark Shriver said he then called his mother, Eunice Kennedy Shriver, who said she was also asked to introduce Caroline, but declined, as did several others. “So it was between me and Arnold,” joked Shriver, referring to Maria’s husband, California Gov. Arnold Schwarzenegger. Shriver said he told him, “‘I got it because I’m better looking than you.’ He was not amused.”

Kennedy acknowledged her mother, Jacqueline Kennedy Onassis. “I was raised by my mother, who believed that mothers are the greatest blessing you can receive,” she said.
She also spoke about the crisis in the New York City public school system, the nation’s largest. “It’s a national, security and women’s issue, and a moral issue, and there’s nothing more important,” she said. Kennedy encouraged the 500-plus people in the audience to offer opportunities to students.

Reflecting on motherhood, Murtha said, “It redefined me and changed the direction of my life.” She said her daughters, who are 28 and 25, “have had to overcome adversity and they’ve become independent, courageous and strong young women. They’ve become my role models.”

Edwards said she decided to keep campaigning for her husband after being diagnosed with breast cancer because she wanted to provide life lessons to her children. “Bad things will happen to you and there are minefields you can’t avoid,” she said. “When things happen to them, you can power through them. Whatever hand they were dealt, they should deal with it in the most graceful way.”