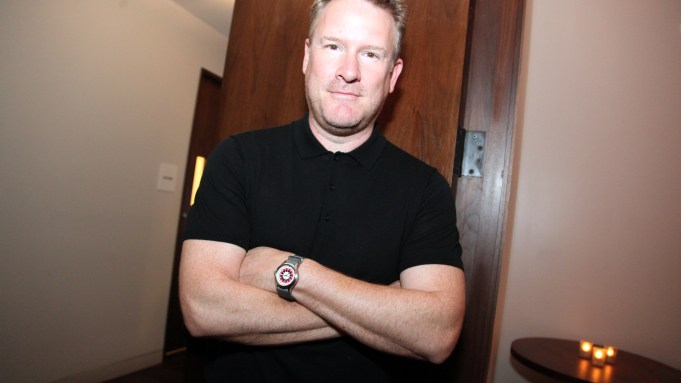 “Here we go,” an editor grumbled heading into the Todd Snyder after party on Thursday night, the sentiment not at all to do with Snyder and all to do with fashion week ennui.

The after party had dual purposes as it was celebrating Snyder’s collaboration with Timex, in addition to rounding out a 72-hour dizzying carousel of parties, shows and little sleep. It was thrown on the second floor of the Marta hotel and despite the irrepressible heat, the balcony proved to be the most popular locale. It was peopled by pipe cleaner-thin hipsters with oily hair and sweaty faces; their only reprieve from the thick, stewy air was the bottled beer being served at the bar.

“I was fortunate enough to be invited to the CFDAs as Todd’s guest and I didn’t know that much about this world before that,” James Marsden said, swigging back his own. Despite not knowing all that much about menswear, the actor attempted to describe what draws him to Snyder’s aesthetic. “His stuff is classic, masculine [with] great cuts. It’s all about the fit and Todd aces that.” Well done, James.

Across the room, Snyder was in hosting mode, greeting his guests. “Relieved, very relieved,” Snyder said, audibly sighing when asked how he was feeling post-show. “The process started almost eight months ago, it starts in the middle of winter so it’s really hard to envision what you’re going to do. But you’re wishing for warmer weather so it’s a fun exercise.”