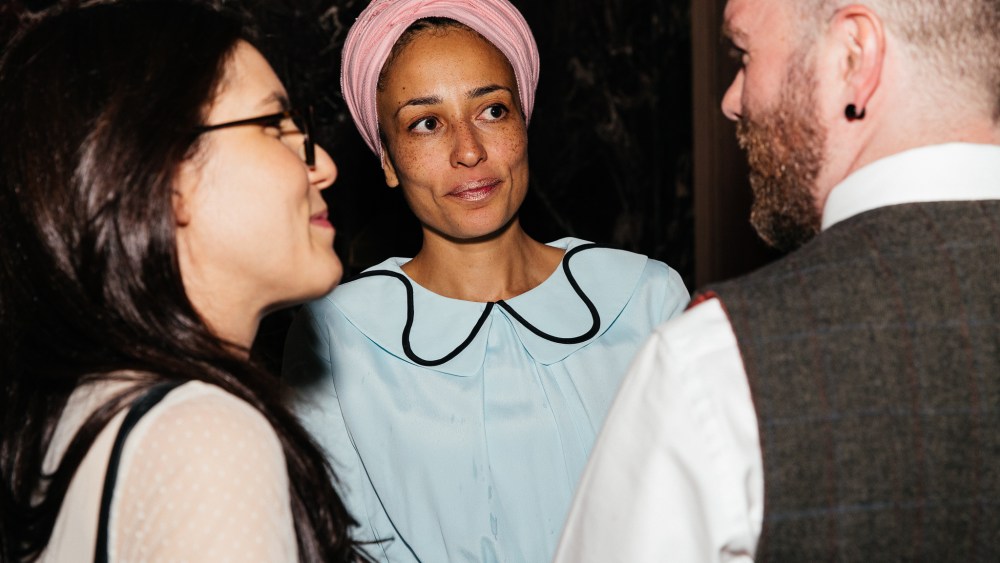 With the meaning of words being minced like never before and many in the country in need of a collective laugh, guests at The Paris Review’s Spring Revel were uninhibited about the hour-by-hour struggle for self-expression.

After chatting with her presenter Todd Solondz, this year’s Terry Southern Prize winner for Humor Vanessa Davis said, “Most people wouldn’t realize how solitary and unpaid my work is. This sounds ironic, because I’m here getting an award. In general, I am normally in a more under-the-radar kind of medium. It’s funny to be in this environment in this glamorous party. That’s just so not a normal part of a writer’s life — at least as far as a new cartoonist has seen so far.”

Adding to the irony, her next task is to ink a few more stories that started with her “Summer Hours” series to publish a book of her work from the literary journal. Davis is also polishing up some large-scale drawings in her newly-rented Los Angeles art studio and occasionally fields TV and film ideas. “I don’t know if that’s just a common experience from living in L.A.,” she said.

With “Welcome to the Dollhouse,” “Happiness” and “Wiener Dog” among his films, Solondz is adept at lightening up any crowd. Diana Taylor chaired this year’s event, which honored Richard Howard with the Hadada award and paid tribute to Bob Silvers and Harry Mathews. In a red and white seersucker jacket, khakis and Converse high-tops, the filmmaker walked the crowd through his recent visit Barnes & Nobles in search of the humor section. “Maybe for people who don’t find fiction and nonfiction funny they go to Humor. Because maybe there they will find something to make them laugh. Underneath the Humor sign, it says, ‘Books that make you laugh.’ It made me think this is kind of a sanctuary, a place where people go to find something funny,” he said.

“Always my heart goes out to people who don’t have a sense of humor, and they have to find it where they can. I know it’s very challenging for some. I don’t mock people if they don’t have a sense of humor. I feel bad for them. This is a wonderful place where they can have a community to meet each other. But when I looked at the titles on the shelves, I wasn’t the right audience. The first one that jumped out was ‘Oy!: The Ultimate Book of Jewish Jokes’ — I couldn’t, I couldn’t open it. Then there was ‘501 Excuses for a Bad Golf Shot.’”

Solondz continued, “A portrait starts to emerge of who this reader, browser is. You can’t say it’s an impulse purchase because it was two flights up.”

The Plimpton Prize for Fiction winner Alexia Arthurs struck a more serious note. In thanking the board of directors for choosing “Bad Behavior,” which “at its foundation is an immigrant’s story,” she said.”This is important at this time when we are made to feel unwelcome to this country.”

Arthurs detailed her own travel woes en route to the Cipriani 42nd Street gala. Three hours before her New York-bound flight departed from Iowa, her dress for the Spring Revel needed a new zipper. Then a well-meaning friend got lost driving her to the airport. And once there, TSA wanted to search “every single piece of item” she had in her bags, she said. “So I’m really, really glad and grateful to be here.”

During cocktails, Sloane Crosley was also glad to be in the author-heavy mix. “Some of them are dear friends, some of them are heroes, some of them are both,” she said, “I worked on the other side for so long in publicity at Random House so that sort of demystifies them in some ways. But you should always have a couple that kind of freeze you in your tracks, when you see them. Otherwise, I think you’re sunk.”

She continued, “It is the same tone as the last essays have been but hopefully applied to slightly more mature issues. The premise has always been a little haphazard. It’s weird essayists consistently feel this pressure to have a theme to sort of sing for their supper by way of sort of an overarching theme. I feel like I kind of got away with murder in the first two essay collections. The first one was allegedly about disappointment – all things are about disappointment. The second one was about travel, but all things are about travel. This one? I can’t reveal the theme yet but it’s very universal but hopefully specific enough to make people laugh.”

By chance, her friend Zadie Smith is also finishing up a collection of essays called “Feel Free” that will be published in February. “I stole the title from my husband,” said Smith, gesturing towards Nick Laird, standing nearby smiling. “He was going to use it for a poetry book. I liked it so much, I nicked it. It’s still an issue of contention for both of us.”