The gala dinner took place under a marquee in London's Kensington Gardens. 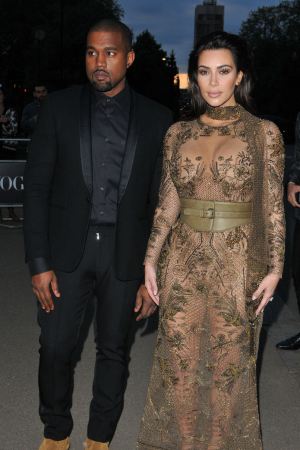 CENTURY CLUB: Only the best-known model in the world can get away with being later to a party than even Kim and Kanye, and that was just the case when Kate Moss turned up 90 minutes after the start of the gala dinner Monday marking a century of British Vogue, whose cover she’s graced 37 times.

Inside the vast tent at Kensington Gardens in London, which had been the scene of the annual Vogue Festival last weekend, guests — including the Kardashian Wests, who had been escorted by Peter Dundas — had already taken their seats by the time Moss arrived with celebrity makeup artist Charlotte Tilbury.

“For a 100th birthday party this is a pretty-fine looking crowd,” said Alexandra Shulman, British Vogue’s editor in chief, casting her eyes around the room before guests sat down to a dinner of smoked mozzarella followed by fillet of lamb. “It is a somewhat out-of-body experience being here because this evening has been in our minds for so long.”

Earlier in the evening, Demi Moore turned up, surprising Tom Ford. “What are you doing here?” he asked as they waited for their photo op.

“I was just in town,” said the actress, who earlier in the day had visited the Chelsea Flower Show, which opens to the public on Tuesday.

Alexa Chung’s father had also been to the annual botanical extravaganza organized by the Royal Horticultural Society.

“He’s really into gardening. He and my mum go every year,” said Chung, who was wearing Prada. “Sometimes he’ll just call me to tell me the hydrangeas aren’t doing so well, and I’ll just say, ‘Of course not, Dad, because we live in Hampshire and the soil is hard.'”

Ford was at a standstill due to everyone wanting to say hello. He may have been chatty with friends, but was certainly tight-lipped about his upcoming film, “Nocturnal Animals” —  deflecting questions about it to other topics.

The film, which stars Jake Gyllenhaal, Isla Fisher, Amy Adams and Armie Hammer, is based on Austin Wright’s dark 1993 thriller “Tony and Susan.”

“It’s out in the fall, but I’m not talking about it yet,” said Ford. “But isn’t Mr. Armani looking amazing? Ageless and timeless and so chic. I’m proud to say we’re both wearing the same costume this evening — black velvet.”

After dinner, guests decamped to Tramp, the members-only nightclub in St. James’s, where disco classics kept the dance floor filled and spirits high.