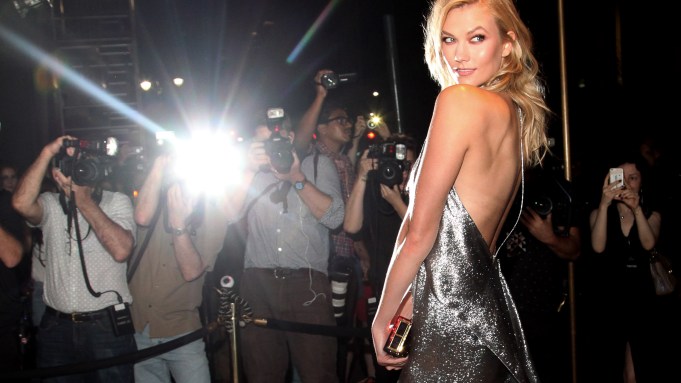 Just when you thought that you’d never see the inside of the recently shuttered Four Seasons restaurant again, Tom Ford decided to give the venue an encore. On Wednesday night, the designer and film director showed his fall collection — available to buy immediately following the show — inside the old Pool Room, officially opening the gate to New York Fashion Week.

Ford recently premiered his latest directorial effort, “Nocturnal Animals”, at the Venice Film Festival to rave reviews. “I just had the most incredible experience,” gushed young actress Ellie Bamber, who appears in the film and was an early party arrival. “I’m just superhappy because I loved working with Tom — my experience was so amazing. I’m so happy that everyone else enjoys the film.” Working with a film director who also happens to be notable a fashion designer comes with some unique perks, too. “This is one of a kind. The embroidery is just incredible,” Bamber said, gesturing to her one-shouldered, glittering Tom Ford dress. “I love that his clothing is so sophisticated, and it’s really nice and sexy. Just every time I have on one of Tom’s dresses it makes me feel so elegant.”

Moore earned a Golden Globe nomination for her role in Ford’s first movie, “A Single Man,” and considers him a close friend (“We’ve been friends for 18 years now — a long time,” she said). “He never lets you down,” she remarked. “His clothes are so beautiful, and he pays such close attention to detail in everything that he does that you know you’ll be well taken care of.”

Ford has thrown his support behind the see-now-buy-now approach, but Moore was quick to point out that actresses have already been enjoying the see-now-wear-now model for awhile. “We usually can just wear it off of the runway, so it doesn’t affect us as much,” she said, with a quick laugh. “But yeah, I think it’s wonderful for everybody. When you see something you want to wear it, so it’s hard to wait.”

Hutton, who spent time chatting with a silver-gowned Kloss, had yet to hear about the new fashion cycle approach. “So usually people wait to see what orders are taken, what people like, and then they make the clothes. Wow. So this is really a new idea,” Hutton remarked. Does she think the idea will take off? “I think that it will probably take the world on fire. And just burn right through,” she continued. “I think it’ll work great. Especially now that everybody’s a fashionista. Fashion has never been so fashionable.”