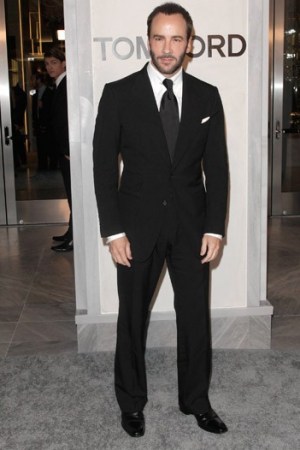 “Men’s wear is downstairs, women’s wear is upstairs,” said Tom Ford as he welcomed guests to his new Rodeo Drive boutique on Thursday night in Los Angeles. As they made their way up, Eva Longoria, Rita Wilson and Tom Hanks did a double take in the curved, polished stairwell, which had a funhouse mirror effect.

On the second floor, Bryan Lourd, Norman Lear, Elizabeth Banks, Jacqui Getty, Gena Gershon, Eva Chow, Lisa and Eric Eisner, Irena and Mike Medavoy all seemed to have gotten the memo on the monochromatic dress code. Hardly anyone clashed with the soft grey interior save for the male models in floral printed jackets and Karen Elson in a new Ford fringed ombre number.

“This store is just like Tom, warm, sexy and inviting,” said Medavoy.

“I mean, everything he does is just flawless. Too bad I can’t wear any of it,” said a nine months pregnant Rachel Zoe. “My water could totally break right here,” she said.

“But that would be very fitting,” a nearby China Chow said.

Elsewhere, Colin Firth nursed a martini while Ginnifer Goodwin sought out Harvey Weinstein. Even though it was crowded, Ford managed to shimmy to Cee Lo Greene’s “Forget You” while he hugged friends and posed for iPhone photos with several people he didn’t know.

As the night wore on, Michelle Monaghan couldn’t tear herself away from the vitrines containing jewelry and bags.

“I think that gold cuff has my name on it,” the actress said. “It says, ‘Dear Michelle, for your 35th birthday…’ I’m just so glad he’s back designing women’s wear. When he left Gucci I felt like he broke up with me, I was so sad. He’s like that naughty ex that you’re glad to take back.”