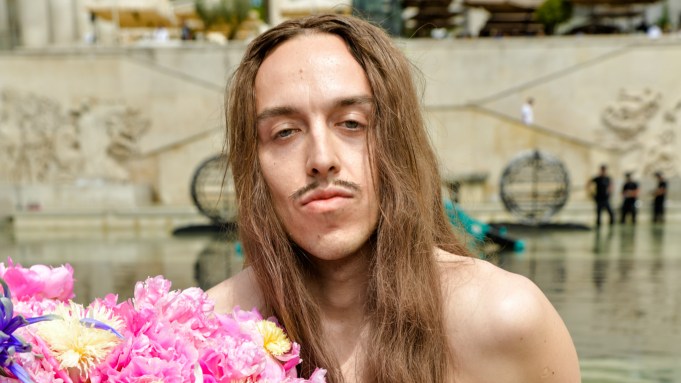 Rick Owens one-upped Times Square’s traditional New Year’s Eve ball drop at his Paris Fashion Week show. The avant-garde designer dropped not only one ball but three, in front of the Palais de Tokyo, and also set them on fire.

It drew an eclectic front row, with Tyga, J Balvin and Twitter founder Jack Dorsey taking in the show. Though he usually sports plain T-shirts, Dorsey is said to be a “superfan” of Owens’ designs.

Brandon Wen, the newly appointed creative director of the Antwerp Royal Academy of Fine Arts, wore a flamingo pink tulle dress to the show. It reflected his buoyant mood after the announcement of his new post.

He praised outgoing head Walter Van Beirendonck’s system for fostering creativity. “I don’t have to shake everything up, but then do it with my energy and with a new positivity,” he said, reflecting on a sense of post-pandemic renewal. “I think after COVID-19, the team is a bit frustrated and it was just all of the things at once. So I think they were like, ‘Brandon, you have a positivity that’s contagious, so bring this energy.’”

Assessing the current fashion scene, he added that he believes there’s a sense of playing it safe right now. “It feels like people got scared and everything is repetitive,” he said. “So it’s exciting that I get to be part of guiding a new generation of people.”

Post-Soviet conceptual rapper and longtime Rick Owens collaborator Tommy Cash stunned the crowd in a flesh colored thong. Just a few well-placed Rapunzel style long locks to kept things somewhat covered. What was the idea behind being nearly naked at a fashion show? “Everyone is so dressed up, so someone needs to undress,” he said.

As the audience sat in direct noonday sun, several eyed the pool and fountain. But Cash demurred from any skinny dipping, joking: “I think I’ve gone far enough.”