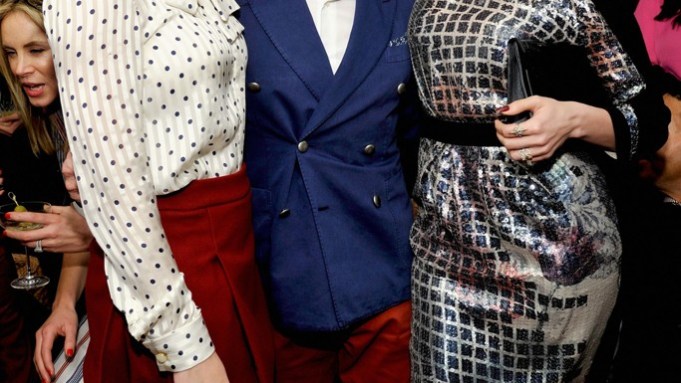 It was a lovefest, not a case of one-upmanship, on Wednesday as both Topshop and Tommy Hilfiger celebrated Los Angeles store openings a few blocks apart. Hilfiger opened his doors on Robertson Boulevard and Sir Philip Green threw a party at Cecconi’s up the street to toast his new store at The Grove. Hollywood usually doesn’t see such cross-party pollination outside of awards show fetes.

“I swear, we didn’t plan it that way,” said Green.

“No, I just like to follow Philip wherever he goes,” quipped Hilfiger, who stopped by Cecconi’s after Green made an earlier stop at his store.

Inside the restaurant, Topshop muse Kate Bosworth was relishing her latest role. “I’ve loved the brand forever, so it’s fun to get to work with it in this context,” she said. She also happily told friends of fiancé Michael Polish, her date for the evening: “I found the best guy. I’m the luckiest girl.” Polish spent most of his time stationed against the bar; he is set to direct Bosworth in a new thriller called “Rememory.” There was all manner of mini-clad starlets at the party, from Emma Roberts and Isabelle Fuhrman to Ashley Madekwe and Christa B. Allen.

The music continued at Tommy Hilfiger’s Soho House after party, where an eclectic mix, including LaToya Jackson, Kanye West and Kim Kardashian, Jessica Alba, Neil Patrick Harris, Katy Perry, Albert Brooks and Kaley Cuoco, took in Alicia Keys and Guns N’ Roses in a surprise showing that kept the house packed until midnight. Hilfiger introduced Keys as his Thanksgiving dinner companion and advised the audience, “Everyone please quiet down, so you can hear how incredible she is.” But Keys encouraged participation, asking the crowd if she should modify “Empire State of Mind” to suit the environs with L.A. or Los Angeles. L.A. was the unanimous suggestion, and she belted out, “Let’s hear it for L.A., L.A., L.A.”

In true rocker form with sunglasses, a brimmed hat and his signature shuffle, Axl Rose, who clearly has gotten over Hilfiger clocking him in a 2006 club brawl, shouted, “It’s good to be here. We’ve been trying to get a gig here,” before lobbing obscenities directed at Soho House.

There were no L.A.-specific changes needed for Guns N’ Roses’ set of classics that had Lopez, Dakota Johnson, Danny Masterson and Jenna Elfman singing along to “Sweet Child o’ Mine” and “Welcome to the Jungle.”