The designer played host at the Brompton Road store. 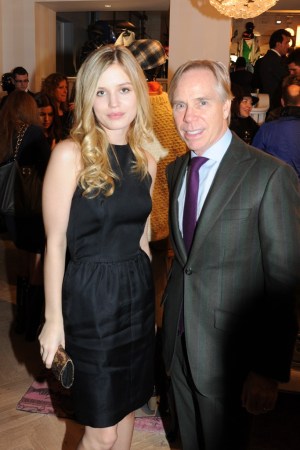 LONDON — “This is now my favorite store,” said Tommy Hilfiger on Thursday night as he scanned the vast ground floor of his new flagship on the Brompton Road here, near Harrods. “When New York opened, that was my favorite, and when Paris opened, that took its place. It all keeps getting better and better.”

Hilfiger and his wife Dee hosted some 200 guests at the new store, which is a mix of beachy, laid-back East Coast charm and British quirk. Team Tommy restored the Victorian blue glass tile ceilings in the men’s area and installed a big blue wooden staircase — something you’d find at a rambling beach house — at the front of the store.

Lennox has been working overtime this week for designers on both sides of the Atlantic: On Monday night she starred in a tribute video to Paul Smith, who won the outstanding achievement in fashion prize at the British Fashion Awards. “I looked really rough in that video,” she said with a laugh. “But I was happy to do it. I just love him.”

After the party, a clutch of guests moved on to Mark’s Club in Mayfair, where Charles Finch hosted a dinner for the designer.

“Tommy, you are a true gent,” he told the designer. “You’ve had an extraordinary career, and clearly this night caps it off.”