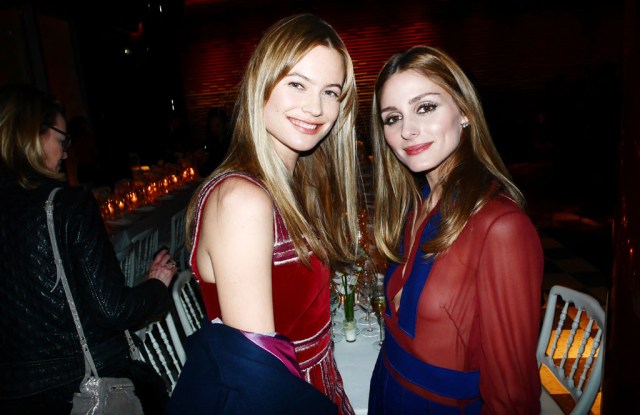 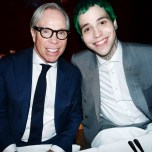 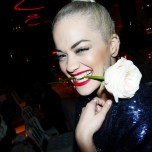 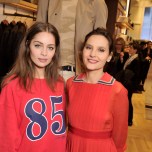 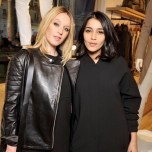 With his arresting green hair and famous girlfriend, Richard Hilfiger made quite an entrance at the cocktail Tuesday night to fete his father Tommy’s second Paris flagship store.

Photographers and selfie-seekers mobbed him and Rita Ora as they posed as a couple and family style with Tommy Hilfiger and his statuesque wife Dee Ocleppo.

“It was my favorite look from the collection,” Ora said, spinning around to show off her dramatic, red leather parka, as roomy as a boxing robe. She noted she would be releasing a new single next month — and heading to Disneyland Paris in the morning.

Ocleppo remarked on the exceptionally synthetic tinge of Richard Hilfiger’s cap of hair. “I change it all the time,” the rapper, who is also learning to play the guitar, said of his shamrock locks.

Are they hard to take care of? “Well, sometimes when my hair gets wet, the color drips down my face,” he shrugged.

Later, a smaller pack repaired to Les Bains Douches for more cocktails and a three-course dinner. Hilfiger noted he has a lot of history with the famous nightclub, which he described as the Studio 54 of the French capital.

“When Dee was modeling in Paris, she used to go there all the time,” the designer said.

“Every single weekend,” Ocleppo piped in.

Virginie Ledoyen said she recently wrapped the film “Rabid Dogs” in Canada, in which she plays “a young woman taken hostage by bank robbers” opposite Lambert Wilson. Next up is a role in Spanish director Koldo Serra’s “Gernika.”