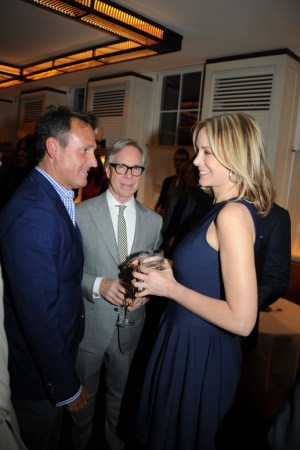 THE INSIDE STORY: “I’ve been going to some shows — and doing some shopping on Savile Row,” said a smiling Tommy Hilfiger, who co-hosted a dinner Monday night with Jonathan Newhouse to celebrate London Collections: Men at 34, the restaurant on Grosvenor Square. Hilfiger visited his favorite tailors Timothy Everest and Anderson & Sheppard, and also dined at Scott’s and La Petite Maison in Mayfair. Speaking of favorites,  one of his favorite artists — Marc Quinn — was at the dinner, where guests included Georgia Byng, Marigay McKee, Matthew Rhys, Russell Tovey and Tinie Tempah.

Quinn pulled out his iPhone and scrolled down to an image of the unfinished work that he’s doing for Hilfiger — a painting of an eye’s iris with a map of the world on it. “We’re planning to unveil it at Art Basel in Miami in December,” said Quinn, who was also showing off another creation — a watch he designed in collaboration with George Bamford. The face shows a map of the world, and the arms are airplane-shaped. It costs 28,000 pounds, or $44,000, and it’s selling out, Quinn said. “It’s a bargain — it’s art after all,” he added. “But I would say that, wouldn’t I?” Quinn’s wife, the children’s author  Georgia Byng, meanwhile, was decked in a checked Tom Ford suit — of sorts. “It’s actually made in India from fabric I bought from a shop near Savile Row,” said Byng. “I have one real Tom Ford suit and the cut and fit are so amazing that I’ve had it copied multiple times. Tom doesn’t mind at all.”