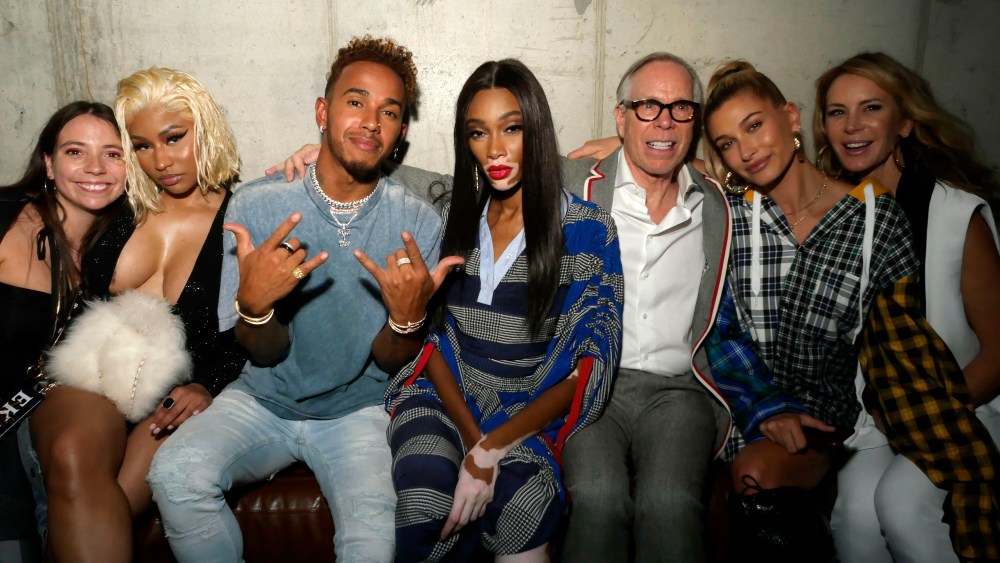 He may have shown his new collection in Shanghai, but Tommy Hilfiger still gave New York Fashion Week a show. A rager, if you will.

Lewis Hamilton had just retreated to the VIP area of Public Art, the basement club at the Public Hotel, on Monday night and the area was swarmed with friends-of, alleged friends-of, camera crews and mere fans. One could only imagine what the scene was like outside the venue. In other words, it was a good night for whichever security staffing company contracted for the event, which was celebrating Hamilton’s collaboration with Tommy Hilfiger.

“Honestly, I’ve never had a party before,” said Hamilton, sandwiched in a booth by Nicki Minaj on one side and Hilfiger on the other as Drake’s “Nice for What” blasted overhead. “Apart from my father threw my 21st [birthday], but since then I’ve never had a party, so I’m overwhelmed. I can’t believe how many people have come out, I can’t believe this partnership I have with Tommy is finally coming to fruition. And to see so many people wear my clothes here is mind-blowing. I’ve been to parties, but I’ve never had my own, so to have my own party now is kind of freaking me out a little bit. Even wearing my own clothes today is — it doesn’t makes sense in my mind, you know?”

The party was already shaping up to be the highlight of Christian Combs’ New York Fashion Week.

“I like the energy that’s in the air, there’s a good vibe in here, good music,” said Combs, who’s also the face of Tommy Jeans. He was donning a bedazzled “Bad Boy” necklace around his neck, the insignia of his father’s record label. “I’m a bad boy for life, you know?” he said. (He added that Tommy Hilfiger also adds to his feeling of swagger.)

Hilfiger was certainly enjoying himself — as he put it, hosting the NYFW party was “fun, fun, fun, fun.” “Lewis is amazing, he’s so driven, he’s so focused, he knows what he wants. I love his fashion sense, but I love his spirit of life,” added the designer of working with Hamilton.

“Anything Tommy’s ever done has just been the right thing,” said Victor Cruz, making his way through the crowd with Karrueche Tran. “It’s always felt organic to the brand. That’s always what these collaborations are all about.”

Another Tommy collaborator, Gigi Hadid, was in the crowd, and had brought her parents along; Hailey Baldwin was also there, sans fiancé Justin Bieber. And good thing, because the party was exciting enough as it was.

Around 11:30, as the crowd continued to coagulate around the stage, Travis Scott emerged as the night’s surprise performer. “For those who don’t know, I like to f–king rage,” Scott declared, launching into his set. A few songs later, he had another message for the crowd. “New York City, I love you! Tommy, I love you!” he said, before hopping off the stage just five minutes shy of midnight. And just like that, he was done.