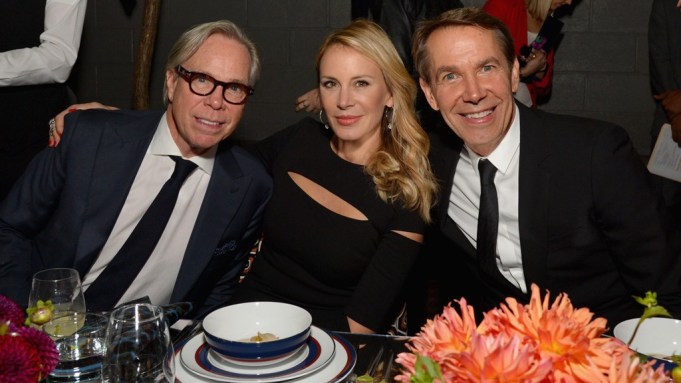 As the High Line prepares to open its last, northernmost section on Sunday, it hosted its second annual High Line Art Dinner in Manhattan Wednesday night under the cover of the Chelsea Market Passage. Sponsored by Tommy Hilfiger Home, the event featured sunset cocktails on the Diller-von Furstenberg Sundeck, a special tequila tasting and a dinner with beautifully appointed long tables. Among the 200 guests were Jeff Koons, Tommy and Dee Hilfiger, Terry and Tina Lundgren, Ed Ruscha, Martyn Lawrence Bullard, Carrie Preston and Emily Bergl.

“I’ve watched the progression. It’s very exciting about bringing the High Line to 34th Street,” said Macy’s Inc. chairman and chief executive officer Terry J. Lundgren, noting now they’ll need to figure out how to tie it in with the entrance to Macy’s.

Starting at Gansevoort Street (three blocks below 14th Street), the High Line is being extended from 10th Avenue and 30th Street to 12th Avenue and 34th Street. “It’s the first time the High Line is going west,” said Jenny Gersten, executive director of Friends of the High Line. Mingling among the crowd that included people from the worlds of art, architecture, entertainment, fashion and urban planning, Lundgren said he’s just starting to become an art collector and recently bought his first Helen Frankenthaler painting. He had to slip out before dinner because his San Diego-based daughter — a horse farmer who is expecting her first child — was in town and the family was dining at Spice Market. Lundgren said he’ll become a grandfather for the first time in February.

Hilfiger said he chose to sponsor this event to celebrate the launch of his home collection by LF USA. All the tablewear, napkins, pillows and silverware at the dinner were provided by Hilfiger’s tabletop collection.

An avid art collector, Hilfiger recently unveiled his Florida beach home in Miami. The finished result was featured on the cover of September’s Architectural Digest. “It’s Studio 54 goes to Miami via Andy Warhol,” said Lawrence Bullard, the interior designer. The home is filled with Basquiats Warhols, Keith Harings, Roy Lichtensteins and sculptures by Koons. Bullard said he’s also working on the Raleigh Hotel, which Hilfiger and an investment group purchased. “It’s a very historical restoration. We’re going to restore it to what it was in 1940 with its original splendor and bring it back to being the most important Deco hotel in Miami,” said Bullard, noting the hotel’s relaunch will be in 18 months.

Koons, who was seated next to Dee Hilfiger at the dinner, observed, “I think Cecilia Alemani [the curator of High Line Art] is doing such an amazing job. I’ve been following the course of the High Line and it’s always interesting to watch. They’re taking you somewhere and they’re grand in their ambition. The High Line is becoming a place that gives opportunity for outdoor sculptors and performance artists.” Koons said his retrospective at the Whitney Museum of American Art, which runs through Oct. 15, is headed to the Georges Pompidou Center in Paris in November.