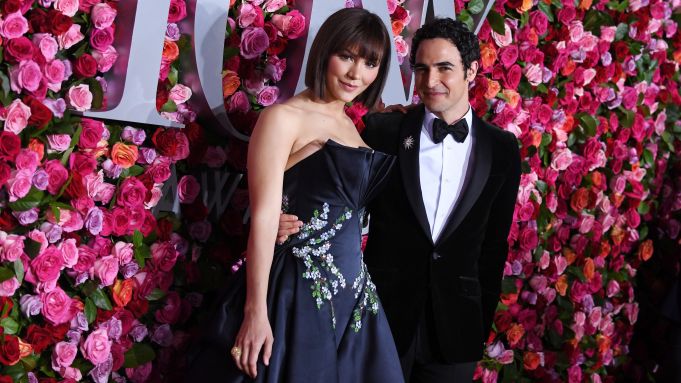 The most unexpected guest making an appearance on the Tonys red carpet?

You guessed right, it was Sparky. The goat (@goatsonthisisland) was out supporting his “Once on This Island” castmates, including Hailey Kilgore, who was up for best leading actress.

Producer Jordan Roth had plenty to cheer for this year. “I’m so proud to be here with ‘Angels in America’ and ‘Frozen’ and ‘Mean Girls’ and ‘Springsteen,’ and this is the night we get to celebrate what a wide canvas we have on Broadway, and why it matters,” Roth said. But the cause to celebrate didn’t end there; he and husband, producer Richie Jackson, met at the Tony’s 15 years ago.

“This is our anniversary party, welcome!” Roth said, standing next to Jackson.

“Yes yes yes yes!” Roth said. “So the discrepancy is the following -”

“It’s literally the only thing we disagree on,” Jackson added.

“The date of the Tony Awards we met was June 8, 2003,” Roth said. “He celebrates June 8 as our anniversary, and I celebrate Tony Sunday. I’m right clearly.”

“Either way we get to celebrate twice,” Jackson said.

“We actually met today,” the designer said. “I was traveling and I actually went to the premiere of Indya’s show ‘Pose’ and I loved it so much. I thought she was so fantastic and luminous and intriguing, and I reached out pretty much that night. I didn’t really know what was going to come of it but Indya was game.”

Moore seemed a satisfied customer, to say the least.

“It just reminds me of, like, a gnome or an elf or something mystical,” she said.

Altuzarra stayed neutral when asked which show he was rooting for, but stressed his love of the theater.

“It’s just such a happy and celebratory evening. Just being able to see a number from each show is really what I’m looking forward to,” he said.

“This is your first time walking the red carpet?” a neighboring reporter asked her.

Another pro, model Grace Elizabeth, arrived on the arm of Wes Gordon, who dressed her in a Carolina Herrera suit for the night.

“I just thought it might be nice to wear something a little more suited,” the model said. “With fashion, I get thrown in gowns all the time, and I thought maybe a suit would be better suited for the Tonys.” She didn’t elaborate, but Gordon was relishing the fact they were all dressed up for a non fashion event.

“Honestly, we’re just so excited to be here because it’s not a fashion event, it’s an industry we don’t work in, so we just get to be here,” he said. “We had the CFDAs the other day, it’s been a lot lately. So to sit back and enjoy the show [will be nice].”

Ari’el Stachel, who later picked up the Tony for Best Featured Actor in a Musical for “The Band’s Visit,” made a last minute outfit change to sneakers for his big night.

“I was very nervous about it — this was a big thing today. It felt risky…and I literally chose the shoes today at, like 1 p.m.,” he said, standing next to his mother. “I was going to wear dress shoes and I was like ‘I gotta do something different.’”

The thing he was most excited about from the night? “Denzel Washington,” he said. “And also to see parts of the other shows. I haven’t been able to see other shows because I’m in a show, so just to be able to watch snippets of their numbers, and also to just being aware of the fact that little tiny shows we do in small New York theaters, the world will have a taste of.”

Andrew Rannells was getting into formation with his “Boys in the Band” castmastes for a photo opp; they were all dressed in color complementary tuxedos in shades of green, blue, and burgundy.

Costume designer of “Once on This Island” Clint Ramos had also taken a team approach for his Tonys look.

“It’s Alexander McQueen, and it’s called ‘Tree of Light,'” he said of the graphic on his shirt. “I thought it was appropriate because in ‘Once on This Island,’ our lead becomes a tree at the end.”

Cynthia Erivo, the big winner for “The Color Purple” two years ago, wore a New York Vintage gown from 1937 for the occasion.

“My stylist managed to find it for me, I don’t know how it fell into her hands…we were trying on something for something else and I put this on and was like ‘this is the dress I want to wear for the Tony’s. This is it,’” Erivo said.

Any nerves the scheduled performers might be having were spared from Erivo.

‘I don’t know that I get stage fright. And I like the pre-show tingles, because I feel like it reminds me that I care,” she said. “They sort of dissipate throughout the show, and I’m OK with that. It’s a reminder that I’m alive, that I’m breathing, and this is real and you care.”

“I just pretend that I’m somebody, I’m not me,” was how nominee Lauren Ridloff of “Children of a Lesser God” copes with stage nerves. “That’s not me on the stage, so whatever I’m doing onstage, I can blame her, not me,” she said, through an interpreter. “And so that’s easy.”

Stress-free was Condola Rashad, having just wrapped the final performance of “Saint Joan,” for which she was nominated, hours earlier.

“It feels amazing, I’m elated, but it’s also a lot to deal with,” she said.

Wayne Coyne of The Flaming Lips, nominated for best original song for “Spongebob Squarepants,” dealt with his pre-Tonys nerves by doing some sartorial arts and crafts with his wife.

“I think it was a way of us being occupied with something to do other than thinking oh my god what’s going to happen when we go to the actual thing, because it’s sort of nerve racking if you don’t do this all the time,” said Coyne. “I feel pretty good now.…I think we’ve been around a lot of people that feel good and confident and its kind of rubbing off on us.”

Nerves aside, Coyne had his eye focused on the prize.