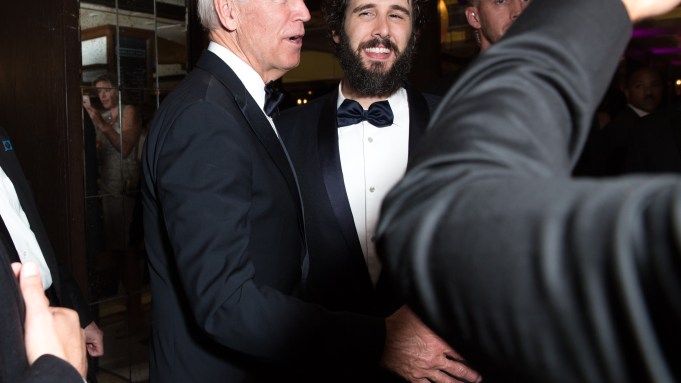 “Have you seen Joe Biden? We hear he’s walking around.”

Half past midnight after the Tony Awards, the lower level food hall of The Plaza was a well-dressed mob of Broadway’s biggest stars (and their admirers), and rumors of a Biden sighting were running rampant.

The one person drawing slightly more oohing and ahhing? One Josh Groban, heavily bearded and in high spirits despite coming up empty-handed at the awards (Ben Platt proved tough competition, winning for best actor in a musical for “Dear Evan Hansen”).

“Josh Groban is here!” a near-breathless hanger-on gasped to her cohort, diverting her attention from the trays of cake pops and black and white cookies in hopes of catching a glimpse of the performer.

Groban and Biden together were perhaps the photo opp of the party.

“I sang at President Obama and Vice President Biden’s inauguration concert eight years ago on the National Mall in front of a million people, and as we got to go down the aisle he shook our hands and was so sweet,” said Groban. “They’ve been supporters of the theater community, so it’s great to see him again. We’ve crossed paths a few times. I’m a big, big fan of Joe Biden.”

The actor made his Broadway debut this season in “Natasha, Pierre, and the Great Comet of 1812,”  for which he worked up a sweat performing on Sunday night. “I’ve sweat through a shirt already and I’m now on my second shirt,” he confessed. “Now it’s time to have some finger foods and booze.”

In equally high spirits was Mike Faist, who was nominated for his supporting role in “Dear Evan Hansen.”

“Oh my gosh — I thought it was wonderful. Kevin did such a wonderful job, and it was so much fun,” the young actor said, clearly riding high from the night. “I’m so happy to be here. ‘Great Comet,’ that performance was amazing. What a fun vibe. It’s been such a whirlwind and truly a pleasure. And now we’re here and we just get to enjoy it.”

Seated low-key at a corner table with her publicist was Cynthia Nixon, who won her second Tony Sunday night, for “The Little Foxes.”

“It makes me very proud for our whole production because it’s so beautiful,” she said. “It was such a popular, well-known play and it had kind of fallen to disuse, and I think that Dan Sullivan was able to take it and dust it off and sort of get all the old paint off it and reduce it to its essence. It’s a play that has great parts that you can win awards like this one.”

The only downside to winning was missing much of host Kevin Spacey’s performance. “He did so many funny things, and of course I was gone for a long time,” Nixon said. “I mostly saw him do the first number which I thought was hilarious.”

Nearing 1:30 a.m., the masses were beginning to dwindle, but the energy of certain guests seemed unshakable. Waiting in line for a photo at the step and repeat, one attendee swore to their friend that the whole experience had been “spiritual.”

How’s that for drama?