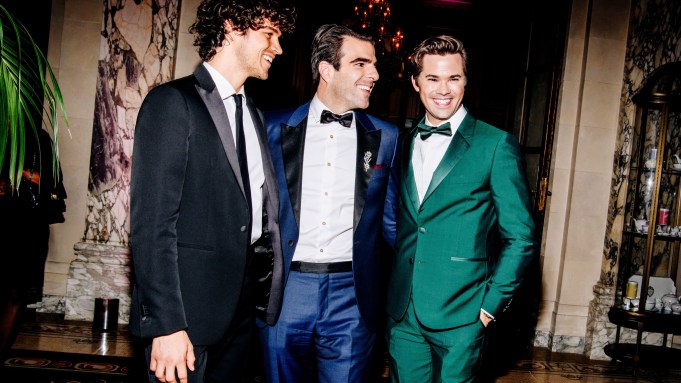 Shortly after the Tony Awards ceremony wrapped at 11 p.m., the crowd moseyed — mostly via a fleet of chartered buses — a few blocks uptown to the Plaza Hotel, for the night’s annual official after party. The winners had their trophies on proud display, including a glowing Lindsay Mendez, Ari’el Stachel and Jordan Roth, who was greeting well-wishers at the entrance to the hotel’s Palm Court early in the night. Nearby, an elderly man was using his cane to hold up the draping palm branches for the ladies passing underneath.

Inside, the circular bar was a popular first stop. It was there that one admirer grabbed a waiting Andrew Rannells, his “Boys in the Band” castmates huddled nearby for a photo opp. Katharine McPhee rested at one of the circular tables post-snack, hard to miss in her Zac Posen gown, while others had pulled a costume change — Cynthia Erivo, for example, had switched her vintage gown for a black-and-white houdstooth suit.

Win or lose, the crowd was equally celebratory. Downstairs at the food court, Lauren Ridloff intercepted fellow actress nominee Ashley Park with a hug as she moved through the crowd. Laurie Metcalf, winner of best featured actress for “Three Tall Women,” darted in covering her face from cameras, not long before winner Nathan Lane pulled a similar camera-shy move upon arrival.

The first-timers on the Tonys after party circuit were still rather dazzled by the whole experience.

“I think probably getting to share the stage with Sara Bareilles and Josh Groban for a minute,” said “Spongebob Squarepants” actor Ethan Slater, of the night’s highlight. “It was pretty special looking out and seeing my fiancé in the audience, and then looking up and seeing the rest of Radio City was pretty awesome.”

The actor was nominated for best lead actor in a musical but sadly went home empty-handed — though that seemed to have little effect on his mood.

“It was a really wild night,” he continued. “I got to be at the Tonys and celebrate the awesome Broadway season, and now we’re at the fanciest party I’ve ever been to of my whole life, so I’m trying to soak it all in.”

Luckily, soaking it all in is what his spongey character does best.