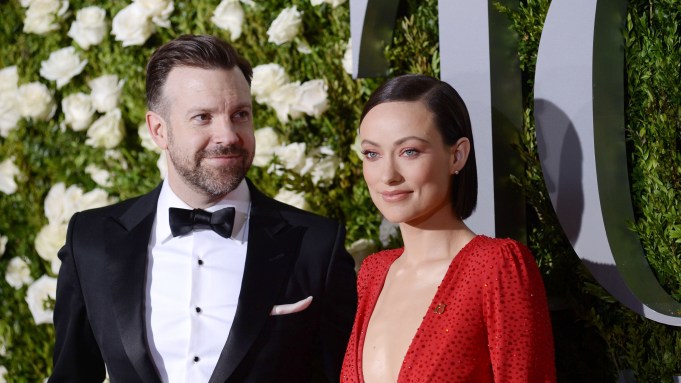 It was 10 minutes or so into the official start time of the 71st annual Tony Awards red carpet, and things were already in meltdown mode.

A large suit-wearing publicist nursed a pink and purple handheld fan, seeking salvation. Sweat pooled from the foreheads of security guards, uniformed in heavy black suits and tuxes. Worst off was a reporter tasked with a Facebook live, who had momentarily blacked out and was taking a breather on the floor.

“It’s 91 degrees, so I think we’re all just doing the dab every once and awhile,” said “Bandstand” lead actress Laura Osnes of the heat, blotting her face.

Yes, it was hot — but that didn’t stop Broadway’s top talent from donning their evening best for the big night, held this year at Radio City Music Hall.

“Doll’s House, Part 2” actress Condola Rashad, nominated for best performance by an actor in a featured role in a play, walked the carpet in a Vivienne Westwood gown. “I have this phenomenal stylist that I work with, Thomas Cartner Phillips; we met a couple weeks ago and I tried on a few but the minute I put this on I was like ‘This is the one — there’s no other way,’” she said. Lucky for her, she just so happened to pick a light, strapless look with humidity-proof glam to match.

“Here’s the thing, we kind of planned well,” she said. “This dress is not hot, it’s not floor-length, so I’m actually feeling good. And we lucked out and made the decision for the ponytail a while ago. Perfect timing because it’s 95 degrees.”

Since Anna Wintour got involved a few years ago, the model and designer quotient at the Tonys have been significantly upped — even if they don’t have much of a role at the ceremony.

“It’s Liu’s first time at the Tony Awards, and she’s always wanted to come,” said Zac Posen, with Liu Wen on his arm. “She got off a plane from China today so that’s serious supermodel commitment.”

The theater community is seriously committed to inclusiveness and acceptance, in 2017 more so than ever.

“We as theater artists have the power to provoke thought, in the moment. And it’s thought that turns into action,” said Rashad. “So I really feel that me being a theater artist is me being an activist, because of what it is that we’re able to give. It’s this thing that lives in the moment.”

“I know for me, theater was a place where I felt like I could belong, where I could express myself when I was kid, and it’s always been sort of a haven for me,”  said Steven Levenson, who was nominated for best book of a musical for “Dear Evan Hansen.” “I’ve felt like in tumultuous times, when people do feel very lonely or afraid, theater is a reminder that we’re all human, and that these stories onstage are our stories, and it’s really a powerful experience.”

Brandon Uranowitz, nominated for best featured actor in a musical for “Falsettos,” was donning a popular Tonys accessory: a blue ACLU ribbon. “First of all, it’s pride month,” Uranowitz said of the pin adorning his tux lapel. “‘Falsettos’ is about queer history, and the AIDs epidemic and gay families, and right now we’re living in really difficult precarious times, with a lot of people trying to brush us aside and stick us under their thumb,” he continued. “I think a lot of those people who think money is more important take for granted art — whether it be theater, film, TV, visual art, whatever it is — has impacted them in subconscious ways they don’t know about and shaped who they are.”

What was John Lithgow most looking forward to at this year’s awards? “Not being nominated. So much easier to just be a presenter,” the actor said. “You don’t have to worry. You can sit back and enjoy the show — because it is a great show, and you can’t completely relax watching it if you happen to be worrying about whether you’re going to win or not. And if you’re worrying about it that much, you’ll lose all respect for yourself. So I’m a happy man tonight.”

Kevin Spacey Readies for the Tonys
‘Bandstand’ Lands on Broadway: Talking With Laura Osnes
Offstage With Carra Patterson
Kimiko Glenn Makes Her Broadway Debut in ‘Waitress’
‘Dear Evan Hansen’ Star Laura Dreyfuss on Theater in the Social Media Age
Alison Wright of ‘Feud’ and ‘Sweat’ on the Importance of Theatrical Art in 2017