The biggest names on Broadway gathered to honor the year's best performances. 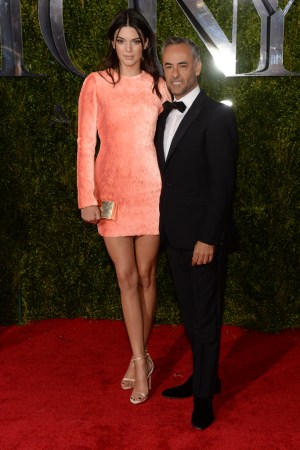 On Sunday night, the Tony Awards looked more like the CFDAs. That was the handiwork of Anna Wintour, who adopted the Broadway awards show as her own pet project after attending last year and finding the fashion to be subpar. This meant a handful of designers — Francisco Costa, Joseph Altuzarra, Prabal Gurung — walked the red carpet flanked by the likes of Kendall Jenner, Vanessa Axente and Bella Hadid, willowy models who may or may not have any interest in the Great White Way. “I haven’t seen any,” said Grace Mahary when asked if she had a favorite production, though like a trooper she did add jazz hands after twirling in her Public School design. Anything to blend in. The nominees also got the benefit of Wintour’s expertise. “We went to a fitting at this amazing, what is it…KDC?” said Sarah Stiles of “Hand to God,” who ended up dressing in J.Mendel, referring to the fashion public relations firm KCD.

“I felt very, very fancy and very pampered,” said Robert Askins, clad in Billy Reid, though the “Hand of God” playwright never actually met the editor in chief. “She doesn’t know who the f–k I am, but thank you for the clothes, Ms. Wintour!”

Not everyone took notes from the editor, though. “[Vogue] did give me some options but I had already picked this one really so I just stuck with it,” said “Constellations” actress Ruth Wilson. Or Julie White, Tony-nominated for “Airline Highway”: “I’ve gone rogue!” said the lead actress nominee in Narciso Rodriguez. “I don’t know, I sort of like it when people make mistakes or make bold choices too. That’s kind of fun as well.”

After the awards were handed out, the theater crowd headed to The Plaza. Rita Wilson, Jason Alexander and Bill Nighy wandered the Todd English Food Hall, while upstairs guests danced along to a cover band. Eventually the party spilled over to The Carlyle, where Tommy Tune celebrated his lifetime achievement award. Inside the Presidential Suite, William Ivey Long, who recruited Wintour for her sage advice, reflected on the red carpet. “I think it went superbly, I think it was a good first step,” he said. “We all feel that we embraced Broadway glamour and we’re still discovering what it is, but I think we have an inkling.”

And what did Ms. Wintour have to say? “She kept squeezing me at different important times during the broadcast. I think it was a good thing. She did say about five times, ‘We’ll talk.’”