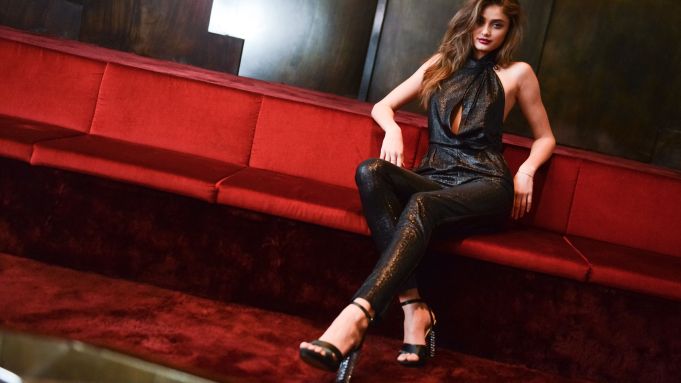 “It was one of the best experiences of my life,” gushed 20-year-old model Taylor Hill. She was referring to her shoot for Topshop’s fall campaign — particularly high praise coming from someone whose résumé also includes walking in the Victoria’s Secret fashion show, twice, not to mention the dozens of runway shows and her cameo in art house film “Neon Demon.” Hill was cohosting an intimate dinner with Topshop at Spring Studios on Thursday night to celebrate her work with the brand. Rose Gilroy, Sarah Snyder, Tali Lennox, and Chelsea Leyland were among those who had come out to toast the pair.

“We did a photo shoot one day, and the next day we did a little video, and I did it with my dog,” Hill recalled of her Topshop shoot. “They were like, ‘We want to see you, we want to see your life, what you’re like, can you bring your dog?’ And I was like, of course.” (Who would object to bringing their miniature labradoodle along to work?) “We had the best day, I played with my dog, and just ran around. It was just like a day-in-the-life-of kind of thing.”

The labradoodle stayed home Thursday night, but another family member came out for the dinner — her younger sister, Mackinley. “Just a bunch of Hills,” said the model pair, taking their seats at dinner next to Kate Phelan, Topshop’s creative director.

“When I first met Taylor, I  instantly knew that she was that perfect Topshop girl,” Phelan said. “She had this incredible audience,” — 5.1 million Instagram followers, to be exact — “and the way that she would talk to her audience was in such a natural, normal way, and it wasn’t based on vanity,” she continued. “She doesn’t make you feel that you  have to be a celebrity to be important, and I think girls in the U.K. really resonate with her.”