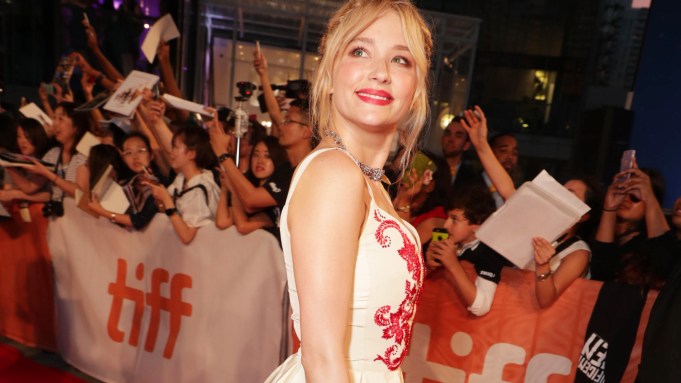 “The heat, baby,” Denzel Washington called out while posing for photos alongside his “Magnificent Seven” costar Chris Pratt. The anticipated Western, a remake of John Sturges’ 1960 classic, opened the 2016 Toronto International Film Festival on Thursday night, and the Oscar winner was referring to the city’s unseasonably hot weather. As Washington dabbed his head with a handkerchief, he seemed too hot to answer a question or two for reporters. “It’s over now,” he said. And with that, he promptly made his way inside Roy Thomson Hall.

Luckily, relative newcomer Luke Grimes was more willing to discuss the film. “What attracted me to the project was the dream cast,” Grimes said of working alongside Ethan Hawke, Vincent D’Onofrio, Lee Byung-hun, Peter Sarsgaard and Haley Bennett, who were all on hand at the premiere. “[It was also] the opportunity to remake such an amazing movie. To be a part of a Western, which I’ve always wanted to do. To work with Antoine [Fuqua, the director], who I’m a huge fan of. The list goes on. There was not one bad thing about being a part of it.”

Grimes said he trained on horseback for six weeks to prepare for his role as “Teddy Q,” a farmer trying to defend his town. “I hadn’t done it before,” he said, while walking a red carpet still damp from the previous night’s rain. “It was a good opportunity to learn though. I love it now. I’ve continued to do it a little bit.”

Asked about the hardest part of filming, Grimes said, without a hint of irony, “The heat. It was really hot, really rainy in Louisiana.” Meanwhile, Fuqua patted his forehead and cracked, “I feel like I’m back in Baton Rouge.”

The film’s lone leading lady, a Dior Couture clad Bennett, who plays a gun-toting damsel in distress, said the film was “a dream come true” and that she “can’t stop smiling” following the experience. Added Sarsgaard, “It’s just really thrilling to see that so many people are still excited about movies — that’s what I love.”

Meanwhile, Zhang Ziyi, a member of the festival’s jury (meaning she gets to don a gown to attend a premiere every night), said her black Elie Saab proved unforgiving. “I’m pretty hot in this,” she shrugged. Even so, she was pleased to be in attendance. “I haven’t seen any [movies yet]. I’m going to see this one and then tomorrow at nine o’clock in the morning I have to start watching my next movie.”

Later in the evening, David Oyelowo joined the cast of “The Wedding Party” at the Elgin Theatre’s Visa Screening Room for their film’s premiere while Fan Bingbing screened her new project “I Am Not Madame Bovary” at the Princess of Wales Theatre. Brie Larson and Armie Hammer stayed up well into the night for their film “Free Fire” and its “Midnight Madness” premiere, which lived up to its name with an 11:15 p.m. call time across town at the Ryerson Theatre. Larson dutifully posed for fan photos, though she bypassed speaking with most press.

Grace Glowicki and O.C. Ukeje, who were honored by TIFF as “Rising Stars,” held down the fort as they promoted their own projects and discussed what the recognition meant to them. Ukeje has a film in the festival called “The Arbitration,” which centers around work place politics and sexual harassment. Glowicki — whose short film “Her Friend Adam” recently landed at Sundance, Tribeca, SXSW — added, “I feel incredibly supported. I want to use my art to expand perspectives.”

Artistic endeavors aside, the newcomers were still learning the ropes. Said Glowicki: “I had coffee, a couple of drinks. I’m starting to fade. But it’s about adrenaline, baby!”