The sprawling party came after a cocktail at her new Paris flagship. 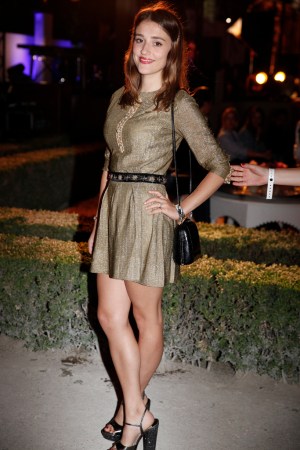 RUNNING UP THAT HILL: Revelers spilled into the courtyard of the Hôtel de Sully, a 17th-century mansion just off Place des Vosges, on Tuesday night to discover that Tory Burch had transformed it into an elaborate, Moroccan-themed garden party complete with tented seating areas. Rugs and pillows had been tucked into the geometric hedges, creating intimate lounge areas for nibbling on dates and sipping cocktails.

It was the part-two of celebrations for Burch’s new Paris flagship store on Rue Saint-Honoré, which had hosted a cocktail earlier in the evening. By the time the designer arrived, strolling through the crowds hand-in-hand with her beau, Pierre-Yves Roussel, chief executive of LVMH’s Fashion Division, Q-Tip was already on the decks and the crowd was churning to Grace Jones.

Many were anxious to hear headline performer Ms. Lauryn Hill, including Olivier Rousteing, who arrived arm-in-arm with actress Jessica Alba, poured into a patterned gown. “I’m such a big fan, her biggest fan ever,” the Balmain designer enthused about the singer.

He harbors similar admiration for Burch, who has built a formidable global fashion empire in only a decade. “She’s such an example for all of us,” he said.

Designer Esteban Cortazar, just back from a Colombian wedding blowout in Saint-Tropez where he dressed the bride, said his memories of Hill’s music stretch back to grade school.

“My first fashion show I did in school, in seventh grade, had a Lauryn Hill song,” he said, searching his memory banks for the title. Ping! “Everything is Everything,” he beamed.