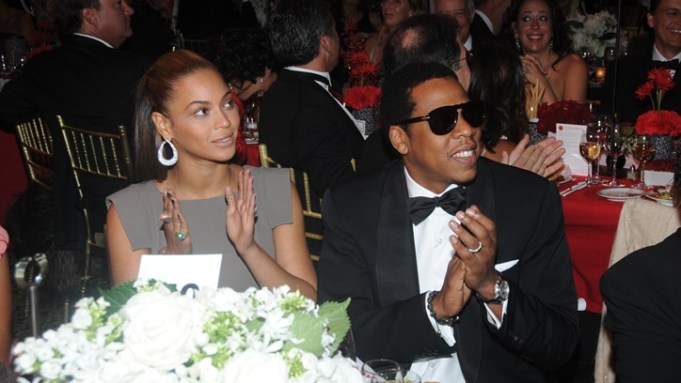 “It’s like ‘Back to School,’” said Jamee Gregory at Tuesday night’s New Yorkers for Children gala. “The first social event of the season.” Not exactly, but there were socials aplenty crowding into Cipriani 42nd Street, including Muffie Potter Aston, Heather Mnuchin, Aerin Lauder, Marina Rust, Jamie Tisch, Amanda Brooks and Marjorie Gubelmann. “I took the 6 train here,” said Poppy de Villeneuve, wearing a very low-cut Alberta Ferretti frock. “But I wore a coat, or else it would be like, ‘Hello, breasts on the subway.’”

Julie Macklowe’s enormous blue Oscar de la Renta ballgown also required a bit of wrangling to maneuver the room. “I have a flask hidden under here,” she joked. Many of the finance types in the room probably wished she wasn’t kidding, as they lamented the collapse of the market. “I give a lot of money to charity,” boasted one who had bellied up to the bar. “And yesterday I gave to a charity called Lehman Brothers.”

Perhaps that mood, combined with the heavy uptown presence, is what prompted stand-up performer Jimmy Fallon to worry, “This crowd is not made for comedy. I know what I’m going to do at the beginning and the end of my act, but as for the middle, I’m just going to wing it.”

“Winging it” included breaking out a guitar and playing a folk number titled “You Spit When You Talk.” “Maybe someone at your table has this problem,” Fallon joked.

Whether or not that was true, chances are the socially savvy celebs in the audience, including Julianne Moore, Mariska Hargitay, Joy Bryant, Kim Raver, Monet Mazur, “Gossip Girl” castmates Blake Lively and Taylor Momsen and Jay-Z and Beyoncé Knowles, knew how to handle it.

Later there was a surprise performance by rapper Lupe Fiasco — during which glow sticks were distributed to the crowd — and a full-length set by musical icon Patti LaBelle, who prefaced her rendition of “When You Wish Upon a Star” with, “I’m gonna sing no matter what happens with the economy.”

The economy, however, showed no sign of faltering inside the Versace boutique the same day, where Liz Swig and Allison Kanders hosted a luncheon in honor of the upcoming Whitney Gala, which the brand is sponsoring. Their guests shopped with abandon, picking up everything from gowns to shoes. “All my friends have bought this,” said Kanders of the navy look she was wearing.

Providing further temptation, a series of looks from the fall collection was shown while the ladies nibbled a delicately portioned lunch. “It’s like Jenny Craig for Versace,” joked Swig.