The Texan rapper entertained guests at a bash cohosted by Saint Laurent and Colette, celebrating a limited-edition vinyl created in collaboration with Anthony Vaccarello. 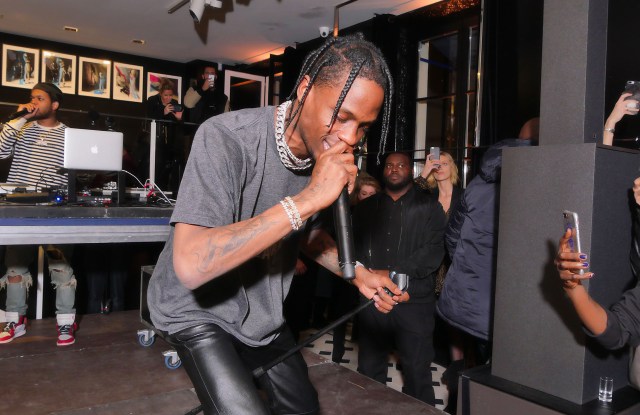 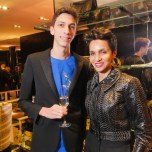 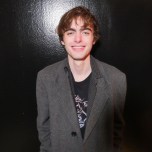 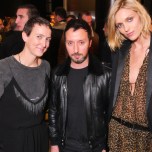 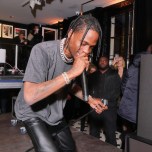 THE RAP: Marking the last official event at Colette in the final countdown to the iconic Parisian concept store’s shuttering on Wednesday, Saint Laurent on Monday night cohosted a cocktail party for the release of a limited-edition vinyl created by Travis Scott in collaboration with the French fashion house’s creative director Anthony Vaccarello. It also served as a wrap party for Saint Laurent’s takeover of the store’s upper level.

In the crowd were a sea of young influencers and Saint Laurent muses past and present, including Catherine Deneuve and Charlotte Gainsbourg, who joined the throng for a stomping live concert by Scott.

The mood was upbeat but emotionally charged, although not everybody was in the loop about Colette’s impending closure.

“It’s closing on Wednesday, I had no idea,” gasped Lennon Gallagher, who rolled up for the gig looking all grunge-chic in a trenchcoat, Saint Laurent T-shirt and shirt, Levi’s and Vans. “To be honest, it’s the first I’ve ever heard of Colette, but it’s a shame it’s closing down, that’s so sad. I’ve lost my Colette virginity tonight,” he deadpanned as a waiter whirled by proffering a tray of Colette-blue veggie burgers.

“It’s too blue,” exclaimed Anja Rubik, pausing to strike a pose with Vaccarello. The polish model, who stars in a series by Japanese artist Nobuyoshi Araki and the designer on display in the mezzanine, titled “Saint Laurent Shiki-in” or “lust for color,” confessed she was feeling a little nostalgic.

“It’s the end of an era. I feel very excited for Sarah [Andelman]. She’s been doing this for a long time. It’s a new beginning for her, but at the same time I’m very sad because it’s such an iconic spot. This was always the place you had to go to when in Paris — you had to go to Colette,” said Rubik, who wasn’t aware that Saint Laurent is in talks with Colette to possibly take over the store on a permanent basis.

“They are? They didn’t tell me. So I’m excited about that,” said Rubik who revealed that — along with Diana Widmaier Picasso and GoldMoney Inc. founder Roy Sebag — she is a cofounder of Mene, a new jewelry concept specializing in 24-karat pure gold and platinum jewelry, where customers can buy, sell and exchange pieces by weight. Rubik said she’ll be in charge of the creative direction of the brand’s image.

Swooshing by in a candy-pink fur, Amanda Lear, who codesigned one of the Saint Laurent T-shirts on sale, hit the space’s clothing racks, stopping to stroke the sparkly items.

Farida Khelfa, who turned up with her towering 19-year-old son Omer Seydoux, said she was also having a hard time imagining Colette no longer being there, having been part of “Paris’ story” for two decades.

“It’s quite moving. For me, it’s part of the Parisian landscape. It’s right next to the Louvre, in one of the city’s most popular areas, and I come here a lot. I worked for a long time at Place Vendôme, so it’s my hood,” she said.

A beaming Andelman was clutching a signed copy of the limited-edition album that features 12 tracks by artists including Kanye West, James Blake, Frank Ocean and Bon Iver. Scott had scrawled: “Sarah, love you, love 4 ever, you inspired me to be the artist I am today.” The artist, whose real name is Jacques Webster, told WWD his idea was to “pick tracks that mention Saint Laurent or songs with personal meaning to us.”

“From Houston classics to international vibes, this playlist encapsulates the energy of Cactus Jack, Paris and Saint Laurent,” added the rapper, whose electric performance certainly resonated with the crowd. Champagne glasses were sent flying as a group of diehard fans — including Seydoux, who knew all the words by heart — pogoed to the beats. “I love his energy,” purred Deneuve without batting an eyelash, slipping out for a cigarette.

Decked in a black Saint Laurent T-shirt accessorized with a diamond-encrusted chain, bracelet and watch, Scott channeled the night’s mood.