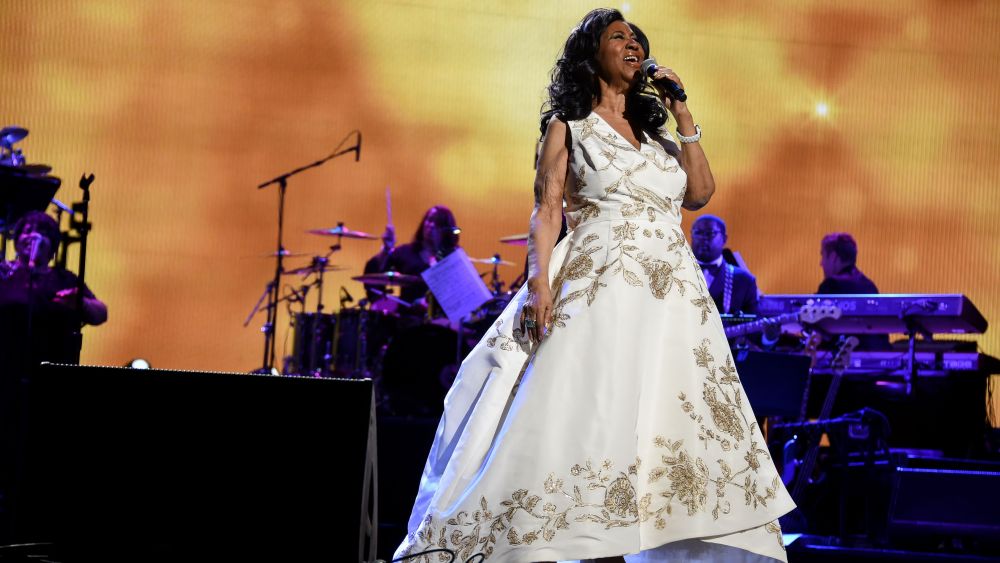 The 2017 Tribeca Film Festival opened Wednesday evening with the premiere of “Clive Davis: The Soundtrack of Our Lives” at Radio City Music Hall. The documentary from filmmaker Chris Perkel details Davis’ storied music industry career during which he discovered some of the 20th century’s greatest talent from Janis Joplin to Bruce Springsteen.

Following the film’s screening, which included tear-jerking footage of the rise and fall of Whitney Houston’s tumultuous public and private life, a star-studded roster of musical legends took the stage to pay tribute to the record executive who made it all happen, with Whoopi Goldberg emceeing the affair.

“I’m fighting an upper respiratory infection so I may miss a few notes here and there,” admitted Aretha Franklin to the packed house. “But I wasn’t going to miss this night.” The Queen of Soul, wearing a white and gold sleeveless ballgown, closed the show with a medley of hits including “Freeway of Love.” Earlier performances included Barry Manilow, Earth, Wind & Fire featuring Kenny G, Jennifer Hudson, Dionne Warwick and Carly Simon.

The “You’re So Vain” singer wore a corseted spearmint green silk gown that has become an heirloom piece. “It was something I found in my mother’s closet and I think it was made for her,” Simon explained. “Then she passed it on to me because it didn’t fit her anymore and I got taller. It’s really been in my family for a long time.”

Simon performed “Coming Around Again” blended with the childhood classic “Itsy Bitsy Spider,” both offering a theme of survival in a possible nod to Davis’ industry longevity and success despite various career setbacks including being fired by Columbia Records in 1973.

“Sometimes it’s a very cool little secret,” Luft revealed. “The other day I came out of a matinee and on a street corner there was a saxophonist playing ‘Over the Rainbow.’ I just stood there and I thought how cool is that? He had no idea.” The actress counts some of Garland’s wardrobe items among her most treasured keepsakes, including the fedora hat the late singer sported while performing “Get Happy” in the 1950 musical “Summer Stock.”

“[The night was] moving, touching and emotional,” remarked Davis at the Tavern on the Green after party. Guests included Grace Hightower, Somers Farkas, Beverly Johnson, Rob Thomas and Candy Spelling.

“My daughter [Tori Spelling] just had her fifth child. I said ‘Tori, you have to stop.’ There are [savings] accounts that I open immediately when they’re born to pay for all of their schools — it’s enough with all the private schools,” laughed the Broadway producer and widow of TV mogul Aaron Spelling.

After supping on a buffet offering of sliced beef, Caprese salad, salmon and scalloped potatoes, many of the guests faded into the wee hours. But Franklin — who arrived to the party in a full-length fur coat and headscarf — held court in a corner banquet well after many others had retired, instead waiting past 1 a.m. for her moment to chat quietly with the man of the hour. Now that’s respect.