The festival wrapped up Saturday on a similar note to its opening night: with a musical ode to New York. 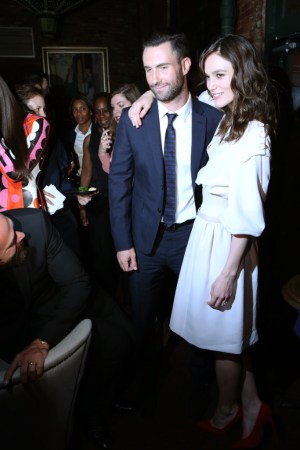 The Tribeca Film Festival wrapped up Saturday on a similar note to its opening night: with a musical ode to New York.

The closing-night film was “Begin Again,” a dramedy starring Keira Knightley and Adam Levine, the Maroon 5 front man, as a musician couple who move to the East Village in search of fame and glory. Levine’s character finds success — and hordes of adoring female fans — and the pair break up, leaving Knightley’s character alone to record her own album, which she does with the help of a failing music executive played by Mark Ruffalo. It played like a big-budget version of “Inside Llewyn Davis.”

The movie delivers two firsts — Knightley’s debut as a singer and Levine’s debut as an actor.

“[Levine] kept going, ‘I don’t know what I’m doing, I don’t know what I’m doing,’” Knightley recalled. “But he’s such a natural entertainer. He has a boundless amount of energy; he just sort of throws it at you and you sort of pin it back at him.” Levine, who walked the carpet of the Chanel-sponsored premiere with fiancée Behati Prinsloo in a decidedly un-rock ’n’ roll navy suit, could relate to his character’s career trajectory. His band’s first incarnation, then called Kara’s Flowers, did not have auspicious beginnings.

“We were 18 and graduated high school and thought we were going to be rock stars,” he said. “Within six months, we were dropped from the label. Basically we were a miserable failure.”

The film’s stars, including Hailee Steinfeld, were joined at an after party at the Tribeca Grill by festival founder Robert De Niro, his wife Grace Hightower and Mayor Bill de Blasio and his wife, Chirlane McCray. De Blasio, who just stepped out for his first major social event as mayor last week, seems to be enjoying rubbing shoulders with the movie crowd.

“It was compelling, a love letter to New York, for sure,” the mayor said of the movie. “It’s very interesting to see your city again in a different way and sort of fall in love with it again…it had this beautiful sense of New York togetherness, the way anything can happen in New York.”

And how was Levine’s debut?

“It was kind of a tough role to play because he didn’t get to exactly be the good guy,” de Blasio said. “He was believable as the not-good guy, so I guess that shows acting chops, right?”