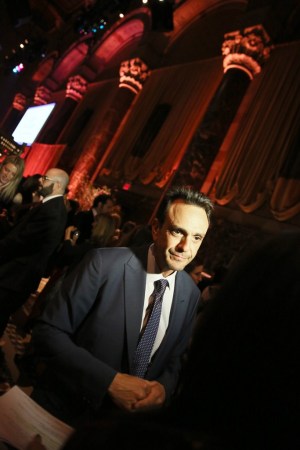 Heavy spring showers kept the likes of Sofia Coppola, John Legend, Emily Mortimer and Al Roker from making their way to Cipriani in Midtown New York Wednesday night for the 5th annual Turnaround for Children awards gala. But at least one television anchor made it.

“It’s tough to make it five years in the nonprofit business,” noted Chris Cuomo, master of ceremonies for the night. “The passion waxes and wanes for things. Even things that seem like they could never be forgotten, like kids.” The news anchor injected a bright dose of humor into the otherwise lengthy program — and acted as a stand-in for California congressman George Miller, who was stuck in Washington.

After dinner, auctioneer Brittney Ingarra, wearing a lip ring no less, took the stage. The most popular lot for the night included a reservation at the esteemed Noma (round-trip business-class ticket included). Reed Krakoff and his wife Delphine quickly entered a bid but were outsmarted by someone else in the crowd — the lot closed for $28,000. “The organization is something incredibly important and something we’re very pleased to be a part of,” remarked Krakoff, who was there supporting several of his friends involved with the charity. Turnaround was founded by former child psychiatrist Pamela Cantor to create a more positive educational environment for low-income children and is currently paired with schools in New York, Newark, N.J., and Washington.

Next, two children from Turnaround schools introduced the night’s honorees — the actor Hank Azaria and Jillian Griffiths, a partner at PricewaterhouseCoopers. “Are we supposed to wear black tonight, or is this a New York thing?” Azaria asked the crowd. “I feel like the L.A. bumpkin. I just moved back here, in the summer; I’m sure I’ll catch on.” The night concluded with a performance by musician Theophilus London, though by then a big chunk of the crowd had grabbed their clutches and called it a night.