Twenties Time Warp at ‘Bring Back the Ball’ 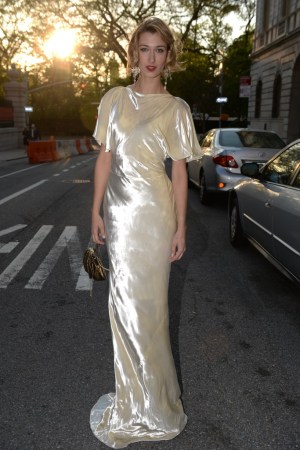 “They used to come to Andy Warhol’s Factory for lunch,” said Bob Colacello, referring to artists Peter McGough and David McDermott, who were honored by the Museum of Arts & Design at Monday night’s Twenties-themed Bring Back the Ball gala held at the James Burden mansion in Manhattan. The artists, who rose to fame with the likes of Keith Haring and Jean-Michel Basquiat at the zenith of the Eighties’ East Village art scene, are known for dressing, working and living as if of another era.

“Back then, they really did live with no electricity. It was quite strict. I didn’t quite get into all that,” Colacello said with a laugh. “But I did like their work.”

A 1929 Ford Phaeton, parked at the entrance of the mansion’s carriage house, set the tone for what the event’s publicists dubbed a “time immersion experience.” Inside, a spiral staircase led to a ballroom and reception area with Baroque ceilings and marble walls (the mansion is now owned by Convent of the Sacred Heart, the Catholic all-girls high school and Lady Gaga’s alma mater). A cigarette girl in a garter belt and thigh highs circulated the room with a tray of gratis Chantecaille beauty products. Guests were serenaded by Dandy Wellington and His Band before all eyes turned to the floor for a performance by dancer Sara Deckard, a spitting image of Josephine Baker.

McDermott, who was unable to attend, once famously said, “I’ve seen the future, and I’m not going.” That quote was inscribed on a silver loving cup awarded to McGough, who was on hand (and who appears to embrace modernity a bit more than his staunchly defiant counterpart). Other attendees included Vito Schnabel, Arden Wohl, Gilles Mendel, Bettina Prentice, Maggie Betts, Vanessa Traina Snow and Max Snow, Lauren Santo Domingo, Indre Rockefeller and Olivia Chantecaille — all dressed to theme.

“I love Ralph Lauren and the first thing I thought about was [his] spring 2012 collection, which was inspired by ‘Downton Abbey,’” said Lauren Remington Platt, in a dress by the designer, her hair curled into finger waves. “I didn’t want to go to a costume party; I wanted this to be something timeless.”

“They’re so in love, you can just tell,” said an onlooker, glancing over at Lake Bell and Scott Campbell, who held hands as they navigated the cocktail hour. Nearby, Sofía Sanchez Barrenechea was almost unrecognizable in a blonde wig à la Jean Harlow. “I knew I wouldn’t have time to do my hair, so I bought this wig in advance,” she said.