Kristen Stewart and Taylor Lautner braved fans for the screening of “The Twilight Saga: Eclipse." 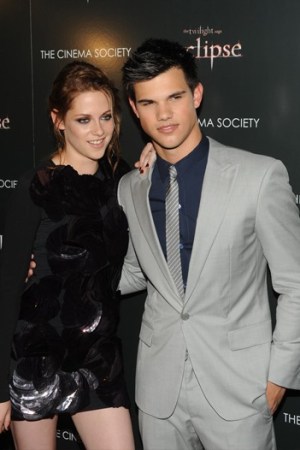 There were no screaming mobs of teenage girls. No hordes of photo-hungry paparazzi. Instead the sidewalks outside the Crosby Street Hotel Monday evening, site of a Cinema Society- and Piaget-hosted screening of “The Twilight Saga: Eclipse,” were relatively serene. A line of seemingly calm girls stood behind a barricade across the street, but there were otherwise few signs that Bella and Jacob (that’s Kristen Stewart and Taylor Lautner for non-Twihards) were about to enter the building.

The intimacy proved a welcome change for the stars of the third installment of the massively popular franchise. Even the famously press-awkward Stewart admitted this time around the publicity tour wasn’t all that bad.

“I think that’s why it’s getting easier, because it really is the same thing every time,” said the actress, sporting freshly dyed reddish hair for her upcoming role in the film “On the Road.” “With stuff like this, it’s getting pretty generic, which is a comforting thing.”

So generic, it seems, that her co-star, Lautner, could use an exciting query or two.

“It’s always great when we get a shocking question, because it’s like, ‘Oh, you’re changing things up a bit.’ I like it,” he said, though he was at a loss to recall any such recent moments.

Despite the event’s chill atmosphere, a phalanx of bodyguards still kept a close eye on the actors at all times. And at the after party in the lobby’s basement, as Dree Hemingway, Lauren Bush, Cynthia Rowley, Rachel Zoe and Georgina Chapman nibbled sushi and mini burgers, Lautner and Stewart (who changed from a minidress into a T-shirt and jeans) stayed in a cordoned-off central section manned by beefy security, posing for pics with fans across velvet-rope barriers.