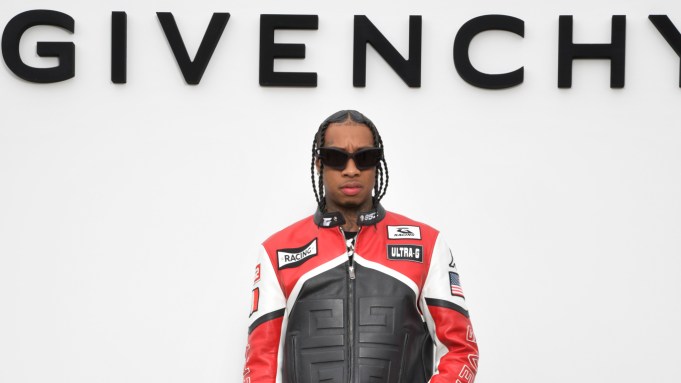 Sitting in the front row at Matthew Williams’ show on the grounds of the École Militaire in Paris, the rapper said he is a longtime friend of the designer from Los Angeles.

“That’s my boy, he’s been killing it,” he told WWD. “I’ve been following his whole thing since it leaked, and this is his first all-men’s show so it should be good.”

“He uses a lot of heavy material and that’s why I like it, it feels very expensive,” he added of the road-style gear. Tyga said he has several motorcycles and loves to ride.

Stylist Ian Connor was in a bright green jacket from the women’s line. “I just felt like going unisex today. There’s a lot of volume. I’m about to take off, I’m about to fly over there to my seat,” he joked of the fluttering Big Bird-like sleeves.

Connor, who also designs the Revenge x Storm shoe line, has no qualms about wearing flashy or feminine clothing. “I’m really confident and secure in what I do, so I don’t care.”

J Balvin, whose signature fluorescent green hair matched one of the major colorways on the runway, sees a bridge between music and fashion. “There’s a big connection between the two of them,” he said. “I love to come here and get a lot of inspiration.”

Models waded through several inches of water to “One More Time” and “After All” form Jamaican musician Alkaline, while Koda Black arrived late and was left without a seat, so he stood in the aisle sipping from a glass of Champagne.

Lil’ Drae sported the face mask that was on display on the runway, despite the humid weather. “It just fits my style. It feels flowy, and I like to go with dark tones,” he said. He’s a fashion show regular by now, having attended “seven or eight” runways, but marveled at the grand setting with the Eiffel Tower in the background. “I”m still new to it and it’s crazy. It’s very inspiring be in a military base, I’m just glad I’m here seeing my homies.”

Liya Kebede was in awe of his outfit. “I love that,” she said, pointing to his face-covering slate look. She just met Williams earlier this season and quickly became a fan. “I find him so nice and he’s really a wonderful person. I’m really getting to know the stuff that he does, it’s like everything and anything, it’s accepting, colorful and free.”

The model is just getting back into the fashion groove. She was giddy at the show set, shaped like a white cube. “I feel like I’m on another planet! I haven’t been to a show in a while, I guess I need to get back into it,” she said. But she was walking in an undisclosed show the next day. After being away for a while, does she have any nerves? “I only get nervous if I have to wear really high heels, which I avoid at all costs. As long as I don’t fall down, I’m good.”

Navigating the cobblestones, Kebede was prepared in chunky clogs.