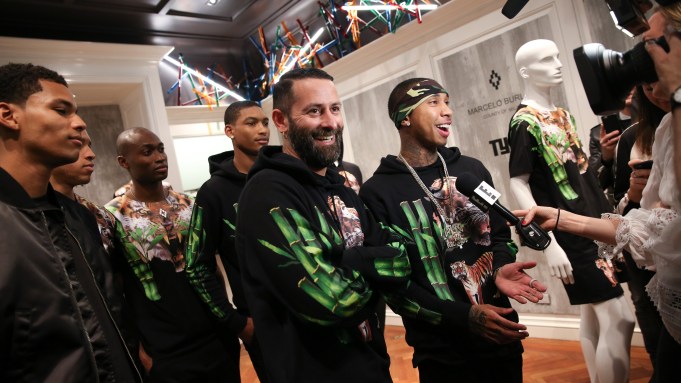 On Thursday afternoon, fans of Tyga filled the floor at Saks Fifth Avenue after the rapper tweeted that he’d be making a personal appearance to launch the worldwide exclusive of the Marcelo Burlon x Tyga capsule collection at the store.

“My favorite piece is the hoodie,” Tyga said of the five-piece collection of T-shirts, sweatshirts and shorts, adding that it was “cool” to do his first in-store appearance at “a high-end department store. It was really dope.”

The appearance, where Tyga signed some autographs and inked his name onto a few T-shirts, was followed by a private party at the shiny new 11 Howard hotel in TriBeCa.

Eric Jennings, vice president and men’s fashion director of Saks, traded his suit for a black leather jacket, jeans and a T-shirt for the event. “The collection looks great,” he said, “and it’s selling.”

Burlon admitted that he was “so stressed,” working on the line but was happy with how it came out. “Usually with rappers and NBA players, you have to deal with divas, but Tyga is such a friendly guy. We just met yesterday, but it’s like we’ve known each other forever.”

The two worked on the collection by e-mailing design ideas back and forth, and Tyga didn’t actually see the finished product until the day of the events. “It came out better than I imagined,” he said.

The two also did a photo shoot that will be used for Instagram and other social media sites, Burlon said.

“I attribute the success of my brand to social media,” he said. “We’re living in an Instagram era and it’s how you make a statement today. I’m not a designer. I’m a creative director, stylist and DJ. But I’m representative of a new wave and we need to adapt to this new era.”

The collaboration also opens up a new world to Tyga, who had worked in the past with LA Gear on sneakers. He expects that he will “definitely” continue to be involved in fashion, although he doesn’t have a wish list of people he’d like to work with. “I’m new to this world, so wanted to get in and learn,” he said. “I’m thankful to Marcelo for this collaboration. I’m open to all possibilities.”

In fact, he said he’s soon planning to launch his own collection, although he’s keeping the details under wrap for the time being. Instead, he’s looking forward to offering up a new song and mixtape “and I have my own show coming out in August — ‘Kingin’ with Tyga.’”

No doubt, he’ll tweet the details to his fan base when the time is right.