The speakers at the Every Woman Every Child gala aimed to spur action to bolster the health of women and children. 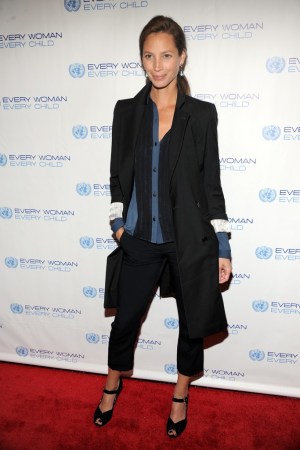 NEW YORK — As high-powered as the speakers at Tuesday night’s Every Woman Every Child gala were, their words were meant to spur action to bolster the health of women and children around the world.

U.N. Secretary-General Ban Ki-moon and other dignitaries reminded guests at the MoMA event that there are only three years left to meet the Millennium Development Goals. The aim is to save the lives of 16 million women and children, prevent 33 million unwanted pregnancies, end stunting in 88 million children, and protect 120 million children from pneumonia by 2015. To date, 250 groups from different sectors have pitched in and $10 billion in aid has been disbursed.

Fame comes with a certain amount of servitude, according to Rai, who told WWD, “Being in the public platform actually brings you the opportunity to choose the causes you want to work with. I always believed by the virtue of what I do that if I was able to attain any celebrity through it, that it is my personal responsibility to do something with it. With this particular opportunity, I am working toward the commitment that no child will be born with AIDS by 2015.”

Rai, whose husband, Abhishek Bachchan, is a fellow actor, said being on her maternity leave freed up her time to pursue the causes she cares about. Now that her baby, Aradhya, is 10 months old, Rai said she is starting to review prospective movie scripts again.

The 300-person audience included such heads of state as the President of Liberia Ellen Johnson Sirleaf and Thailand Prime Minister Yingluck Shinawatra. Asked how the fashion industry, which employs millions of female factory workers around the globe, might help to improve women’s health and keep them safe, Shinawatra told WWD, “Clothes are a basic need, so we have to keep creating new fashions. In Thailand, we give workers multilevel skills to help them. We need to create new designs all the time.”