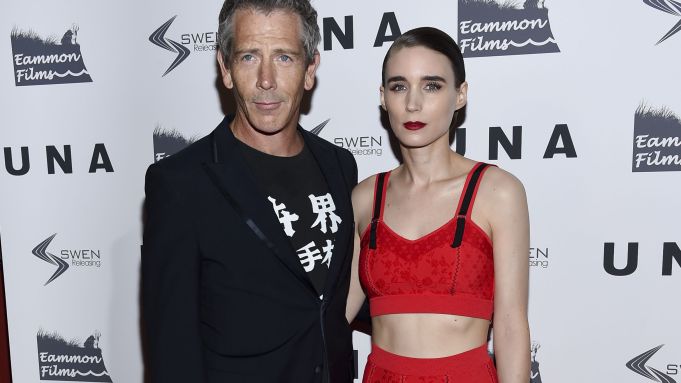 “It was the quickest yes I’ve ever given,” said Ben Mendelsohn on Wednesday night of his decision to work on the film “Una.”

Mendelsohn and Rooney Mara costar in the film, which screened at the Landmark Sunshine Cinema in New York ahead of its wider Friday release. It’s the first film effort of theater director Benedict Andrews, who took inspiration from the stage — the movie is an adaptation of David Harrower’s heavy-hitting play “Blackbird,” which deals with childhood abuse.

“I’d seen the play about 10 years ago, and it just stayed with me and struck me, and I have wanted to do it ever since then,” said a soft-spoken Mara, hair slicked back for the premiere. “There was something really special and unique about their relationship, and the journey [the characters] take during their reunion.”

“The story is about two people who meet again after 15 years, she is confronting him in the workplace — she has these very unanswered questions that are ripping her apart,” said Andrews, elaborating on the plot. “The force of this encounter, I thought, made for strong cinema.”

Although the overall thread of the story remains the same (helped by Harrower, who also wrote the screenplay), the film differs from the original production in approach — including the addition of a supporting character, played by a pre-“The Night Of”-fame Riz Ahmed.

“I think of them like two children, grown from the same DNA but quite different,” Andrews added, when asked how the film differs from the stage production. “I think the film opens up different spaces in the story.”

More Coverage From WWD.com:
An Outspoken Manolo Blahnik Steps Out for His Documentary Premiere
And the Highest-Paid Actress in Hollywood Is…
Lakeith Stanfield, Acting the Part
Tom Bateman, In It For the Thrill of It