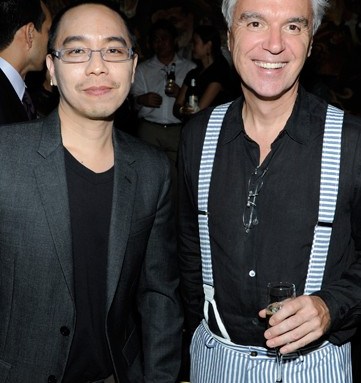 Anyone in New York who could pronounce the name of Thai filmmaker Apichatpong Weerasethakul, plus several men and women who couldn’t, gathered at Monkey Bar Monday night for a dinner honoring the director, whose award-winning “Uncle Boonmee Who Can Recall His Past Lives” recently screened as part of the New York Film Festival.

The movie, which won the Palme d’Or in Cannes, is a trippy story about spiritualism and reincarnation told through characters such as a deceased son who comes back as a “ghost-monkey” and a princess who is seduced by a catfish. But according to Weerasethakul, (who also goes by “Joe” as a courtesy) the audience of social and art types had no trouble understanding the film. He called their questions during the Q&A session “very intelligent,” if not puzzling. “[Someone] asked about the relationship of my film and quantum physics,” Weerasethakul said. “So, okay, let me get back to you in a few years. But this kind of question, it opened my way of thinking also about my film.”

The evening was hosted by longtime Weerasethakul fans Francesco Vezzoli, artist Rirkrit Tiravanija, Black Frame’s Brian Phillips, designer-slash-lawyer Chomwan Weeraworawit and Tilda Swinton and Marc Jacobs (neither of whom attended). But most people in the room, including David Byrne and Greta Gerwig, were first introduced to Weerasethakul’s work with his 2004 psychological drama “Tropical Malady.”

“I find his films kind of hypnotic and very emotional,” Gerwig said. “I think I enjoy how much kind of don’t understand about it, it’s exciting for something to be so oblique and hard to access they’re like a film version of poetry or something.”

Weerasethakul admitted the turnout was a little intimidating. “My movie is about jungle, it’s about nature,” he said. “And for me this is another kind of jungle and I really need to get used to this jungle.”