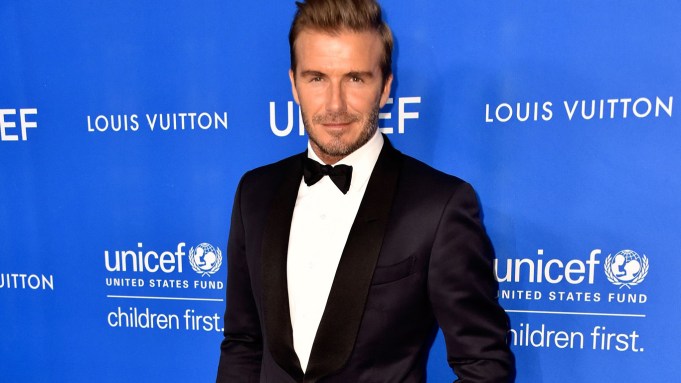 UNICEF pulled out all the stops for its sixth biennial UNICEF Ball in Los Angeles Tuesday night, as guests such as Selena Gomez, Miranda Kerr, Jennifer Connelly and Nicole Kidman poured into the ballroom of the Beverly Wilshire Hotel to honor David Beckham and University of Southern California president C.L. Max Nikias for their humanitarian work. Many of the stars came courtesy of Louis Vuitton, a presenting sponsor and also a new global partner with the charity organization.

“I came to L.A. just for this, because Nicolas asked,” Connelly said. Creative director Nicolas Ghesquière underscored his commitment, saying, “The house of Louis Vuitton is loyal, and they’re happy to enjoy new projects especially when they’re genuine. I think usually when they start something they keep going, and it continues to be this fantastic celebration humanly, financially and professionally.”

He also noted how much he enjoys designing the custom gowns for longtime friends of the house. “As you get to know them, you know what they like, what kind of feeling they are going for, which makes it even more fun because it becomes a real extreme expression of their personality.”

Also making her debut for Vuitton was Ghesquière pal Léa Seydoux, the brand’s newest ambassador. “It’s not bad,” she said of her custom gown. “No, actually it’s great. I’m very proud. It’s my first appearance in Louis Vuitton and I’m very happy to represent the image.” As for UNICEF, she added, “What they’re doing is great. When you’re such a strong company, it’s good that you’re able to help the children and do.”

As emcee Angie Harmon kept the night moving with many tributes to Beckham, none received as many laughs as Elton John did when he presented the father of his godchildren with the Danny Kaye Humanitarian Leadership Award.

“I know this town is obsessed with blockbuster superheroes, but tonight we’re honoring someone that I know to be a bona fide hero,” John said. “He won 19 major trophies, played in four different countries and won championships for them all. He gave up all of that to be a renowned underwear model.” He continued, “But what is truly extraordinary about David is not the depths of his talent, but the depth of his heart. He’s generous and loving to a fault and the world’s children are much better for it.”

Earlier in the evening, all eyes were on Mariah Carey as she serenaded the audience with hits “Always Be My Baby,” “We Belong Together,” and the crowd-pleaser “Hero.”

“She’s gorgeous. It’s so good to see her up there,” Kidman said afterward. “For me, that’s iconic,” said Gomez, who sat front and center. “She’s a legend. We were just jamming away. She has such a great way of transferring emotion.” Although they were on the opposite side of the room, both Lionel Richie and Camilla Belle felt her performance in similar ways. “I needed a fan,” Richie joked of the hot performance and Belle agreed, “I was melting with every word she sang.”

The event raised $2,565,012.35 through the auction of items such as water pumps and SUVs that will benefit UNICEF’s efforts to continue their work.