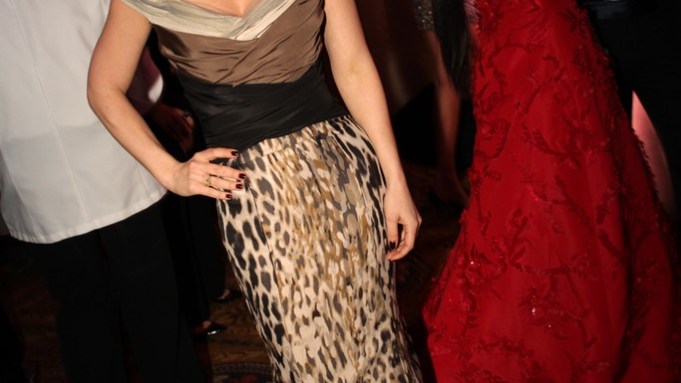 Surely, most of the guests at Cipriani Wall Street had Perry’s special performance on their minds, but Gumbel wanted to be serious for a moment. “UNICEF has saved more children than any other organization in the world. Consider the massive typhoon that recently devastated the Philippines.”

Christina Ricci admitted she wasn’t really involved with UNICEF but would like to be “given everything that’s going on in the world with the typhoon and all the aid that is needed. UNICEF is an institution,” said Ricci, who was wearing a Carolina Herrera gown and Harry Winston jewelry. “It reunites children and families.”

Mark Lee, chief executive officer of Barneys New York, who was honored at the event with the Spirit of Compassion Award, has been working with UNICEF for the past eight years and said a life-changing experience was traveling to Malawi in 2008. “To see the teams on the ground and see where the fund-raising actually goes…we try to weave UNICEF into [the store] where we can,” he said “We’ve done different selling events where we donate a percentage of sales. We’re good corporate citizens and Barneys is quite compassionate. It’s part of the long history of Barneys.”

Daniella Vitale, who presented Lee with his award, said the link between her, UNICEF and Lee dates back to their tenure at Gucci, prior to joining Barneys. “We did business in 175 countries,” she said. “We had to find an organization that would resonate with different countries and cultures.”

Towering over other guests, New York Knick Tyson Chandler, a UNICEF ambassador, said the organization chose him rather than vice versa. “We were looking to get involved,” he said. “I was going on a trip to Africa around the time of the Olympics. Until you get out there you don’t understand what they do.” Chandler especially likes that UNICEF focuses on children. “We have three kids,” he said of himself and wife, Kimberly. “You have to look in their eyes.”

The fashion set was represented by Olivier Theyskens, among others. “UNICEF is so famous,” he said. “It’s very global. It’s exemplary. I believe I’m going to get involved.”