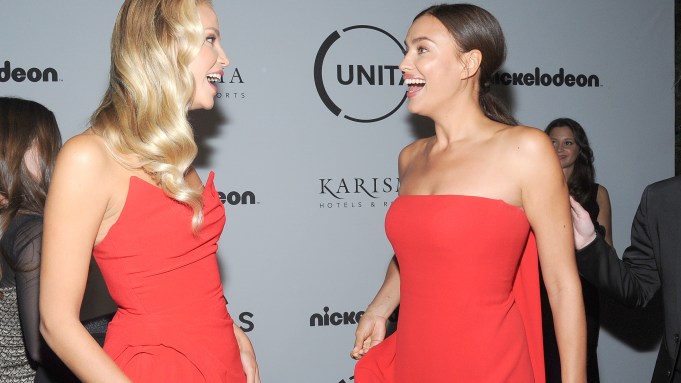 After days and nights of New York Fashion Week parties, revelers were feeling ready to switch it up on Tuesday night.

“This is a really important one,” Nico Tortorella said as he made his way inside Capitale, where the Unitas Gala was getting under way in downtown Manhattan. The actor had come out to show his support for the organization, which raises awareness and funds for the fight against human trafficking.

“[This year], for anybody in this industry that has a platform that isn’t using it for the greater good of where we live and our people, is doing a complete disservice to everyone around them,” Tortorella continued. “There are too many celebrities that aren’t doing s–t, and it sucks, because we have platforms and people listen to us, for whatever reason; it may be a stupid reason — we’re on TV — [but] do something with it.”

The actor described his fashion week as “hectic, hectic.” “Jim Carrey, let’s be honest, he put so much in perspective the other night,” Tortorella added, referring to Carrey’s disparaging comments from the Harper’s Bazaar Icons party on Friday. “It’s kind of like, why are we doing all of this?”

“I have my platform, so I feel like that’s a gift that’s given to me so I can use it to spread the word,” said Strokous. “If you want to reach the children, you can’t just be standing in the library. There’s no way, they don’t listen to you.” The model was only in town for the evening; the University of Southern California film student had to fly back the same night to make her classes the next day. “[NYFW] is busy for everyone else, but for me it’s a different busy. I’m reading like 40 pages that I’m assigned for tomorrow,” she said.

“I think it’s incredible that a cause like this can occur during fashion week,” said the singer Maxwell, who later took the stage to “play some nice songs.” “This is the only thing I’ve done this fashion week, pretty much,” he added.

The evening had a strong model showing, including Irina Shayk, Elsa Hosk, Hanne Gaby Odiele and Lais Ribeiro. Leonardo DiCaprio even made an unexpected appearance halfway through the dinner, sneaking in a back entrance to take his spot at a table a few seats down from Toni Garrn.

“I feel like a lot of events during fashion week are just for self pleasure and fun,” said Jordyn Woods, who walked in two shows and launched her collection for Addition Elle during fashion week. “I actually felt like coming out to this, despite being so exhausted, was worth it. It’s for a good cause and it’s for something that needs more awareness.”

After New York, Woods will head to London Fashion Week before returning home to Los Angeles. “Post-London, I’m going to celebrate my 20th birthday,” she said. “Probably just not do anything, because I’ve been doing so much.”