Unlocking a ‘Mystery’ Bash at Cannes 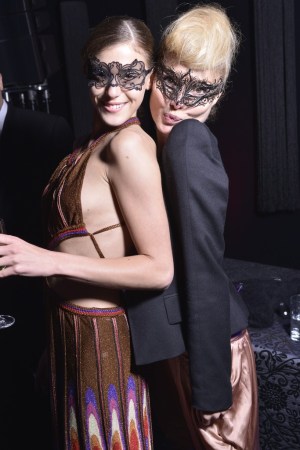 CANNES, France — The sound of frogs croaking in the night greeted guests at a villa in the hills above Cannes, France, where Chopard and Harvey Weinstein held their “Mystery” party on Monday night. In keeping with the theme, the Swiss jewelry and watchmaking firm kept the venue of the bash under wraps. Some guests were ferried to the party in a fleet of cars and vans, while others were handed cryptic directions that some compared to a treasure map.

Sean “Diddy” Combs and his on-off flame Cassie, Alec Baldwin, Natasha Poly, Anja Rubik and Erin Wasson were among those who climbed into buggies that drove them up to the Villa Domergue, where a plethora of entertainers awaited them. Inside, Michael Arenella & His Dreamland Orchestra played retro-tinged jazz, while in a tent in the garden, disco tunes had the crowd on their feet. A dancer from Cirque du Soleil dazzled with a performance that involved spinning a giant metallic cube frame.

Among the guests dripping with precious jewels, actress Michelle Rodriguez stood out with her simple gold medallion necklace. “That’s not my style. I’m a more quiet girl,” she said. So why the two burly security guards? “That’s not me, they’re his security,” she grinned, pointing at her date.

French actress Alysson Paradis said she was in town to present “Emprise,” a short movie directed by Vincent Arnaud that is billed as a feminist film. “I play a strong woman, and it’s pretty funny,” she said.

Weinstein, meanwhile, said he had not yet found this year’s equivalent of “The Artist,” the movie he helped propel to global success following last year’s Cannes Film Festival — though he liked director Jacques Audiard’s “Rust & Bone,” which will be distributed by Sony Pictures Classics in the U.S.

“It’s with Marion Cotillard — I think she’s incredible,” he said. “So that’s a great movie. ‘The Sapphires’ is fun, that is ours, but we’ll see. There’s still a week to go.”

A great fan of French movies, Weinstein is preparing a remake of Gallic box-office hit “The Intouchables” and sees a great future in Hollywood for one of the stars of the original movie, Omar Sy. So are French movies having a golden moment?

“I think they are, and I’m having a golden moment with them,” Weinstein said.