Up, Up and Away

An invitation to a black-tie gala hosted by George Clooney could coax even the most jaded partygoer out the door faster than a speeding bullet... 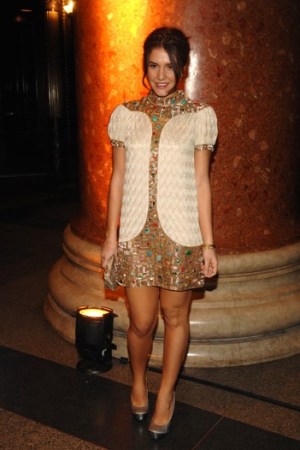 An invitation to a black-tie gala hosted by George Clooney could coax even the most jaded partygoer out the door faster than a speeding bullet—a thematically apropos response when the former Batman hosts the Costume Institute at the Met’s Gala Benefit to kick off its latest exhibit, “Superheroes: Fashion and Fantasy.”

Adding to the star power at the May 5 event will be Clooney’s sometime co-star, Julia Roberts, as well as honorary chair Giorgio Armani. And Armani, for one, can’t wait.

“I am naturally delighted that my friends Julia Roberts and George Clooney, modern- day icons in their own right, have agreed to participate,” says the designer.

If last year’s festivities are any indication (Paul Poiret’s love of plumage inspired four peacocks housed in a 20-foot-high gilded cage), the event will have plenty of theatrics. This time around, the Costume Institute tapped special effects guru Nathan Crowley (who masterminded the high-speed Batmobile races in the upcoming film The Dark Knight) to conceptualize the evening’s overall look. The Met’s Raul Avila, who did last year’s event, will collaborate with Crowley on particulars like table settings and flowers.

Crowley also acted as a consultant on the exhibit itself, which will open to the public 48 hours after the gala’s most “super” attendees morph back into regular civilians. When putting together the show’s 60 outfits, curator in charge Harold Koda and curator Andrew Bolton pulled from movie sets as well as runways and sports arenas. Highlights include the unmistakable tights and cape ensemble that Christopher Reeves slipped into during his star turn in 1978’s Superman, a Thierry Mugler motorcycle bustier equipped with polychrome handlebars, and a so-called “Swift Suit,” an aerodynamic track unitard manufactured by Nike and famously worn by Sydney Olympics 400-meter gold medalist Cathy Freeman in 2000.

It’s no coincidence the show was timed to overlap with this summer’s 2008 Beijing Olympics. Says Koda, “The imagery and physical virtuosity of the superhero would resonate through the performance of the world’s greatest athletes.”

In conjunction with the exhibit, the Met will publish Superheroes: Fashion and Fantasy, with an introduction penned by Michael Chabon, author of the superhero-inspired tome The Amazing Adventures of Kavalier and Clay.

While some might wonder about the link between the Met and comic books, Bolton sees “Superheroes” as inevitable for the Costume Institute. “There is this idea that a superhero is transformed into a new person through fashion, which is really what fashion is all about,” he says.

New York City Ballet’s Spring Gala Performance
WHEN: April 29
CHAIRS: Charlotte Moss and Barry S. Friedburg, Veronique and Robert
Pittman, Mica Ertegun (honorary chair).
WHAT: 48 students from the school of American Ballet will kick off the Jerome Robbins celebration (the theme of  the company’s entire spring season) with Circus Polka…the Four Seasons (to the music of Verdi) and West Side Story Suite.