Upstairs, Downstairs and Everywhere in Between at The Tribeca Ball 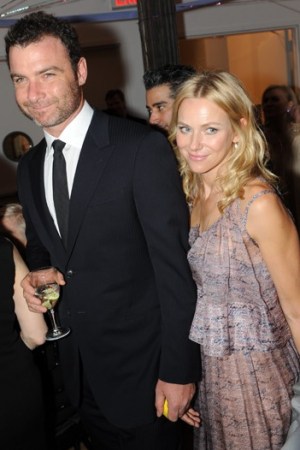 “Amazeballs…” Rachel Roy said with a laugh on Monday night while taking a break from surveying student work at The Tribeca Ball, the New York Academy of Art’s annual fundraiser. “A friend of mine says it on Twitter all the time, and now I can’t stop saying it! Amazeballs!”

The event, which allows guests to sip cocktails and enjoy live performances while appraising the academy’s five floors of studio space, can tend to feel like a vertical scavenger hunt when it comes to the boldface set. Roy’s enthusiasm seemed to be shared by most, if not in exactly the same jargon.

“It’s just so important that we spend time making sure that art gets its due,” Parker Posey explained on the ground level. “Also, I’m making a documentary about etiquette. That needs to get it’s due, too!” The actress began to climb up the five flights of stairs pulled by the hand of her male companion. As they wound upwards, huffing and puffing, a troupe of what looked like DayGlo circus ringleaders — complete with light up piping woven into their suits — joked, “Well, who wants to use the elevator?!”

On the fourth floor, a rather hapless belly dancer shimmied next to an accordionist near a wispy Jena Malone, resplendent in an embroidered floor length white dress.

“I only tend to really support artists that I know, like, my friends,” the actress explained when asked if she considered herself a patron of the arts. She headed off towards the stall of one of the painters, whose largest work featured a pink-frosting-faced man, teeth bared, defecating a pink cupcake.

Kate and Andy Spade staked out the second floor, where they greeted Ann Dexter-Jones. Cynthia Rowley and Bill Powers arrived in a flurry of feathers (her) and light pink (him). Alexandra Richards showed with friends, declining to discuss sister Theodora’s recent run-in with the police, instead opting to “just have fun and see some art. My parents have supported this event for a while. We love it.”

Up on the fifth floor, near a Bedouin-style tent filled with musicians and yet another belly dancer (this one balancing a large sword on her head) an artist quickly sketched caricatures for guests. Yigal Azroeul peered over his shoulder and informed one female sitter that the likeness, “didn’t do her justice.” Leelee Sobieski arrived as patrons began heading back down the stairs to the seated dinner and scooted past Baz Luhrmann, who fielded questions from press and friends alike about his upcoming adaptation of “The Great Gatsby.”

“I’m not going to say much about it,” Luhrmann said with a wink, placing a finger over his lips.

Naomi Watts turned up with husband Liev Schreiber and popped down to the garden level to check out a printing press where guests were offered free woodcut prints to take home.

“We’re just so happy to be part of such an important and wonderful event,” Watts said. “Art is something you hope your children will grow up learning about in schools and appreciating as much as you do.”

The pair then headed in to the dinner with the other partygoers, while the artists packed up their wares and headed off into the night.

“We’re not invited to the dinner,” one of the students explained outside, in a puff of cigarette smoke. “But it’s cool.”