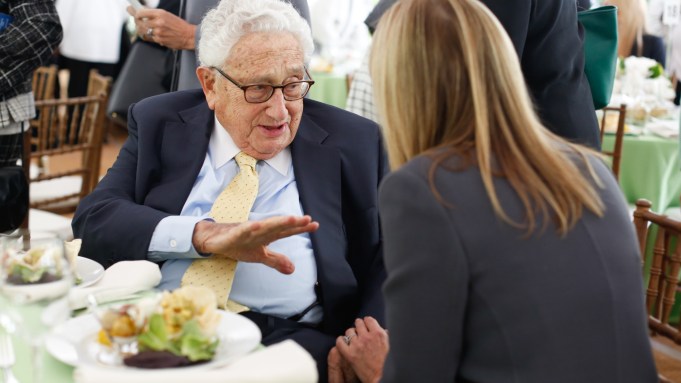 “It’s a bit of a nerdy lunch — I always think of it as the anti woman-who-lunches lunch,” said Samantha Boardman Rosen from a tented lawn at Rockefeller University Thursday afternoon. The majority of society luncheons would be stretching it to quantify themselves as nerdy, but the Rockefeller University Women & Science annual spring lecture and luncheon is, as the ladies confirmed, in a league of its own.

“I think some of those things could be a waste of time, in a way, and this is the opposite,” Boardman Rosen. “It’s always an opportunity to learn something, in the a.m. A good day is a day you’ve learned something. I always tell my friends who are at my table ‘you’re going to walk away a little smarter.’”

“I missed the whole lecture,” Barbara Tober said, walking across the lawn close to 1 p.m. “I go as often as I can — this morning I had a whole thing on shingles so I couldn’t get here in time. But I would like to not be too late to the lunch,” she added, a subtle hint that she was very much ready to be done chatting now.

This year’s speaker was Leslie Vosshall, who gave a speech titled “Global Health Is Local Health; Eradicating Threats From A to Zika,” and had the crowd fired up on the topic of mosquitoes post talk.

“Frightening” was how founding member Nancy Kissinger described the lecture. She was accompanied by her husband Henry, fresh off the plane from D.C. after his visit with President Trump. After being wheeled to his table, the former Secretary of State — and one of the lone men at the lunch — held his tablemates captive with conversation as the lunch wore on.

“When you’re out, cover yourself with deet,” Nancy Kissinger added. “And herbal things do not work. I’m giving you so much information — full deet!”

“I think I want to talk to Leslie and find out how much she really wants to focus in on and talk about odor. But I do think the solution is odor,” Renee Rockefeller offered. “Leslie is the best — she could have a TV show and get so many people interested in science. Not only for their mental stimulation, but she simplifies it. We are not these scientists,  but you come back with a huge grasp and understanding.”

Deeda Blair agreed. “They don’t talk down to this audience,” she said.