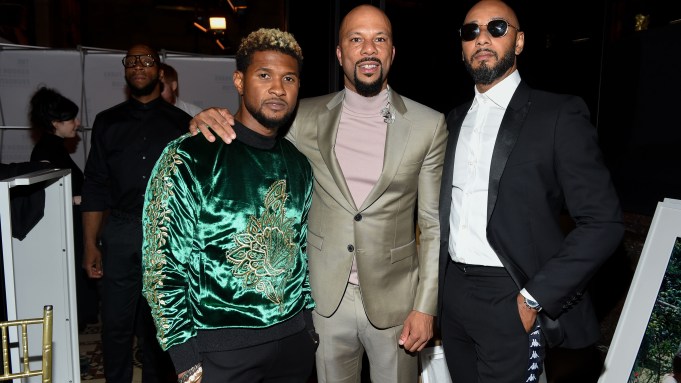 “If you see Chance the Rapper tell him Grandma Mavis is looking to do a duet with him,” exclaimed veteran singer Mavis Staples ahead of receiving an award from The Gordon Parks Foundation at its annual dinner Tuesday at Cipriani 42nd Street in New York.

Staples was joined by many luminaries in the worlds of art and philanthropy at the affair, which honored the late photographer’s legacy in capturing poignant images of the Civil Rights Movement.

“The Civil Rights Movement and the Women’s Rights Movement are not yet finished,” observed Chelsea Clinton. “My parents’ work is also not yet done. I certainly was always grateful to be able to see my parents work and Gordon Parks’ work is inescapably relevant today.”

Wearing a one-of-a-kind emerald green velvet sweatshirt by Moroccan artist Hassan Hajjaj, Usher noted the importance of introducing his young son to charity by bringing him along to the black tie gala. “More than anything I want him to understand empathy and the idea of having and then giving,” the singer explained. “It’s not just all about the glitz and glam of stage and cameras, but there’s a purpose behind it.”

Following a lively auction of select Parks pieces, which raised more than $1.3 million for the organization, the fruits of the foundation’s labor were proudly displayed as 22 college-age students took the stage to accept a scholarship and announce to the crowded room their individual focus of study, from filmmaking to fashion design and photography.

“I loved Gordon Parks and came up [in my career] with his work,” remarked a bandana-clad Bruce Weber. Public School’s Dao-Yi Chow noted he was “not going to miss” the event, which also honored philanthropist Alexander Soros, musician Jon Batiste, Rep. John Lewis and charitable power couple Kenneth and Kathryn Chenault. Others in the crowd included Martin Scorsese, Stephen Colbert, Gloria Vanderbilt and Harry Belafonte.

The evening was capped by a spirited performance from Common, who used a Parks photo of a young girl and her mother at a segregated water fountain for the cover of his 2000 album, “Like Water for Chocolate.”

“He’s always motivated me as an artist and I wanted to pay respect for where a lot of this [inspiration] has come from,” the rapper explained.