Ushering in Summer With the Whitney Contemporaries

The annual Whitney Contemporaries’ Art Party is not for timid wallflowers. 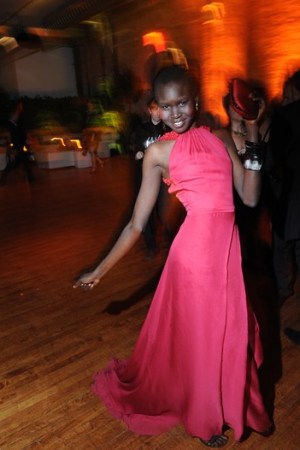 The annual Whitney Contemporaries’ Art Party is not for timid wallflowers. This year held in a loft-like space on Mercer Street (a move from the darker environs of Skylight Studios) made airy by shrubbery and inviting white banquettes, the event, sponsored by BCBGMaxAzria Wednesday night, has become a requisite social stop for fashion and art kids alike. And it seemed there were some pretty serious bidders among the crowd perusing the silent auction, whose offerings included works by Dike Blair, Cecily Brown, Roni Horn and Hunt Slonem.

“What recession—everything’s pre sold!” said one miffed buyer. (A select few got first dibs during an auction preview earlier in the night.)

See all the images here>>

Guests like Maggie Grace, Charlotte Ronson, Eleanor Ylvisaker, Yigal Azrouel, Alessandra Ambrosio and co-host Lubov Azria (husband Max was absent) scanned the lots and even the celebrity contingent in attendance emphasized the art, though they readily admitted to being far from experts on the subject.

“I mean I love art, but I don’t really follow the scene,” said Christina Ricci, in town for her second New York art happening since last week’s Marina Abramovic bash. “I know what I like and I love going to museums and things.”

Co-host Emilie de Ravin was similarly general about her connection with the night’s raison d’etre. “ISP is wonderful, it’s a fun night, it’s great to support and I suppose I also in general have just always really supported the arts industry in every way,” she said, referring to the Whitney’s Independent Study Program, the main beneficiary of the evening’s proceeds.

“I love art, I love being home in New York. A New York party, an LA party—very different things,” said Jennifer Esposito who moved back East a year ago (she was recently diagnosed with Celiac disease and has a food line in the works to help raise awareness of it). “In New York there really is a level of art still that sometimes gets lost in LA for me because a lot of it is based on money and films. It’s a business. And there’s still art in New York, which I love.”

True, but the mix of girls in teeny, tiny dresses (many courtesy of Hervé Leger) and young guys in slick suits meant some were checking out more than just the paintings on the walls. “Everyone here wants to get married or laid,” remarked one observer of the comely crowd.